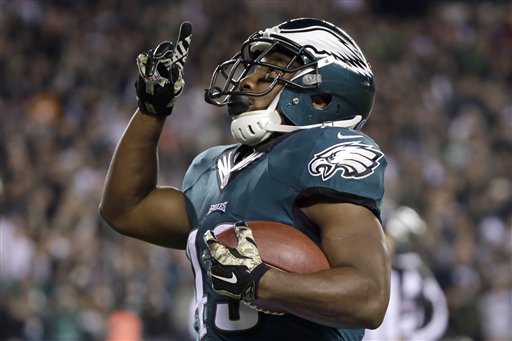 EAGLES ARE FAVORED LARGELY BECAUSE SAINTS ARE SPIRALING DOWN!

Eagles fans are looking for any reason to have hope that the Birds will beat the Saints tomorrow at the Linc, which would theoretically right their ship for the rest of the season.

Yes, they are 5-point faves, rare for a 1-3 team, but a big reason for that line is the sad shape of the Saints.

Darren Sproles (above), an ex-Saint, was arguably the Eagles’ most valuable player in 2014. It seemed whenever the team needed a spark most, the veteran back was the one who provided it. Between rushing, receiving and returning, Brees scored eight touchdowns—six of those coming in victories—and earned his first ever trip to the Pro Bowl.

At 32 years old, Sproles is already back at it again this season, with two touchdowns through four games. To think, the Eagles are getting all of this production for the bargain price of a fifth-round draft pick.

Former Saint Malcolm Jenkins turned out to be a perfect fit for the Eagles as well. While fans clamored for the cost-prohibitive Byrd, the organization instead signed Jenkins to a modest three-year contract worth $15.5 million—$8.5 million guaranteed, according to Spotrac.

He rewarded his new team with a career year. Jenkins lodged new personal bests with three interceptions and 15 pass breakups while playing all 16 games for the first time. He also added 80 tackles and a forced fumble, and is off to a roaring start in 2015 with three pass breakups and two forced fumbles.

The Eagles, like the Saints, are only 1-3 right now. However, it’s through no fault of Sproles or Jenkins, two of the team’s best players.

It’s unclear what the Saints were thinking in both cases.

Yes, Sproles was aging, and injuries lended the appearance he was losing his quickness. With one year remaining on his contract, they saw a chance to shed some salary and get something in return for a player in decline.

It’s clear the front office misjudged Sproles’ ability, because he’s been as explosive as ever. It’s evident Brees misses a teammate who averaged 77 catches per year over his three seasons in New Orleans.

And, true, Byrd was a far more decorated safety than Jenkins, who was mostly average during his time with the Saints. However, the cost to sign Byrd was astronomical by comparison, not to mention costly long term, and his injury problems were not difficult to see coming.

Not only that, but Jenkins is a leader on and off the field and a true student of the game. He may not have any Pro Bowls to his name, but he was important inside the locker room.

Plus, signing a player of Jenkins’ caliber could have freed up the cap space to retain Sproles. Are a healthy Byrd and a fifth-round pick that much of an upgrade over the combination of Jenkins and Sproles?

The Eagles may look like a franchise in disarray through four games this season. Then again, no team has misallocated funds and mismanaged its roster more poorly in recent years than the Saints, who have been dumping stars left and right the past couple offseasons.

On Sunday, both Sproles and Jenkins will have an opportunity to show the Saints what they’re missing. Of course, both players would take winning and getting the Eagles back into a playoff hunt over proving a point to a former employer.