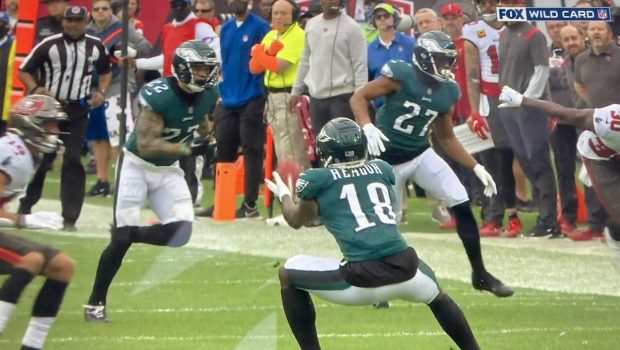 EAGLES GOING NOWHERE WITH REAGOR, BARNETT ON THE FIELD!

Just getting into the NFL playoffs, then competing for the Super Bowl are two different things, as we all found out yesterday when the Tampa Bay Buccaneers thoroughly outplayed and outclassed the Eagles 31-15.

And it really wasn’t that close.

Putting subpar players on the field such as Derek Barnett and Jalen Reagor, the Birds were unable to compete with the league’s best.

The flaws of these two players were front and center as they were exposed by a superior team.

Those bad draft picks can’t happen again in this April’s draft if the Eagles expect success in a postseason game.

The Bucs were without key players, no problem. Eeven 2nd-stringers Giovani Benard and Ke’Shawn Vaughn were able to ram in short touchdowns for Tampa Bay.

The Eagles still have a long way to go to compete in the playoffs, they can start with this year’s NFL draft but can’t keep coming up short with the talent level to get there.