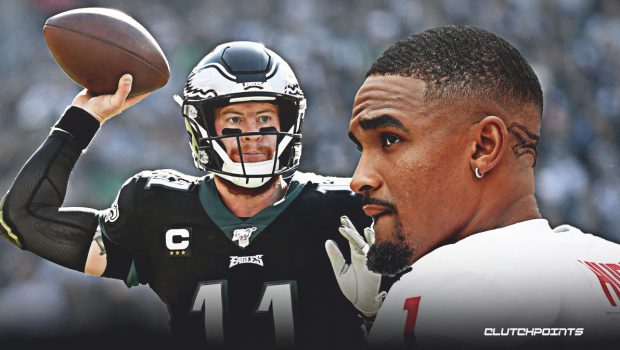 EAGLES ‘ARE ALL MARRIED TO CARSON WENTZ,’ HOWIE SAYS!

After drafting quarterback Jalen Hurts with their 2nd and 53rd overall pick in last week’s NFL draft, Eagles brass has taken a lot of heat about what that means for Carson Wentz’s future.

Eagles’ GM Howie Roseman made an appearance on NFL Network’s “Rapsheet and Friends” podcast, and he said that the team is “married” to Wentz.

“Coach [Doug] Pederson and I, Mr. [Jeff] Lurie and I — we are all married to Carson,” Roseman said. “We’ve shown it with our actions.”

“We are married to Carson Wentz. Coach Pederson & I, Mr. Lurie & I — we are all married to Carson. We’ve shown it with our actions.” — #Eagles GM Howie Roseman (13:10) to @MikeGarafolo on RapSheet + Friends, going deep on his QBs new and old. More here: https://t.co/koKzqMSysn

Hurts is an explosive athlete who will potentially be lined up all over the field when the Eagles are on offense.

The Eagles signed Wentz to a four-year, $128 million contract last June, and he played well despite a limited number of receiving options. He threw for over 4,000 yards and 27 touchdowns with just seven interceptions while leading the Eagles to the NFC East title.

The Birds drafted former TCU wide receiver Jalen Reagor with its first-round pick and selected two more players at the position later in the draft, but with Wentz constantly injured, the Eagles wanted to solidify their backup quarterback position just in case.