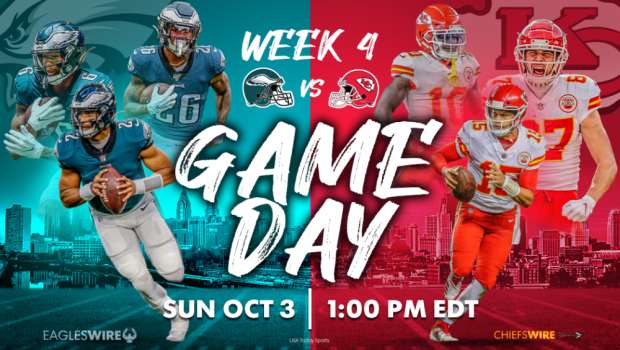 EAGLES ARE A 7-DOG TO CHIEFS AT LINC — WHY LINE MAY BE LOW!

Here’s what Sheil Kapadia of The Athletic thinks about today’s Eagles-Chiefs game:

The Eagles had a number of issues that contributed to a blowout loss in Dallas.

The coaching staff didn’t do enough to put Jalen Hurts in position to succeed. Hurts didn’t play well. The offensive line was banged up. And the defense got steamrolled. There was one snap when they trotted out a defensive line of Ryan Kerrigan, Milton Williams, Hassan Ridgeway and Tarron Jackson. With all due respect to those players, that was a reminder of how many of the Eagles’ issues are simply due to a roster that’s not very good.

The Chiefs’ defense has been a disaster, but offensively they’re fine. Kansas City ranks second in EPA per play and nearly beat the Chargers last week despite turnovers on its first three possessions. The Chiefs are 2-12 against the spread in their past 14 games going back to last year, but I just have a hard time seeing a scenario where the Eagles keep up in this one.