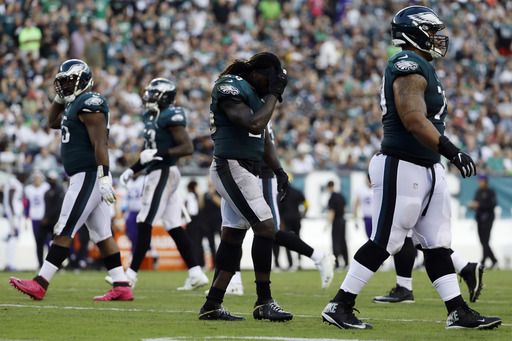 The Eagles have nearly slashed their playoff odds in half after a slow start. Before Sunday’s loss to the Vikings, they had been an almost perfectly average team, going 2-2 with four close games and a point differential of plus-one. A pair of goal-line stops against the Falcons and Colts in Philly had managed to keep the Eagles from following their Super Bowl season by bafflingly starting 0-4.

Obviously, the hope was that the Eagles would right the ship after a frustrating loss to the Titans by beating a reeling Vikings team at the Linc Sunday afternoon. That didn’t happen. While the Eagles got close with a late Zach Ertz touchdown to make it 23-21, they were outplayed for the vast majority of this game, only for Dan Bailey to miss two field goals. The defense forced one three-and-out all day.

If you’re trying to figure out what’s missing in comparison to the championship team, the issues start with the defense. Philly’s pressure rate is down from 28.2 percent to 23.1 percent, and correspondingly, quarterbacks are completing 67.5 percent of their passes while throwing the ball a full yard deeper in the air. Jim Schwartz’s unit is also struggling to force takeaways, having racked up five in five games after generating 31 turnovers during the regular season in 2017. The Eagles aren’t as healthy as they were along the defensive line, with Haloti Ngata and Derek Barnett both missing Sunday’s loss.

The other side of the line is struggling too. The Eagles found their offensive line last season when they benched guard Isaac Seumalo after two games and replaced him with Stefen Wisniewski, who started the rest of the way. With Wisniewski struggling this season, the Eagles turned back to Seumalo on Sunday, but he was no match for Linval Joseph & Co. on the interior. Lane Johnson has given up two strip sacks in two weeks, with backup end Stephen Weatherly beating Johnson on Sunday and forcing a Carson Wentz fumble that Joseph returned for a 64-yard touchdown.

As for Wentz, while he’s a comfortable upgrade on the Nick Foles we saw in Weeks 1-2, he’s still finding his sea legs. He ranks 23rd in Total QBR after three games, just ahead of Carr, and many of the places in which he was likely to regress are coming up as nuisances. He has a 74.3 passer rating on third down, which is 27th in the league. The Eagles were 2-of-9 on third down against the Vikings on Sunday. Wentz’s 95.8 passer rating in the red zone is 21st in the league, and the Eagles scored just six points on their first three red zone trips before two late touchdowns against the Vikings.

This was supposed to be an easy start for the Eagles, who didn’t expect to go 1-2 against the Bucs, Colts and Titans. They get the Giants on a short week Thursday night, but they’ll have a home game against Carolina and a trip to Jacksonville before their Week 9 bye. The NFC East remains up for grabs, but the Eagles have lost the clear path to a division title that it seemed like they might have enjoyed before the campaign: