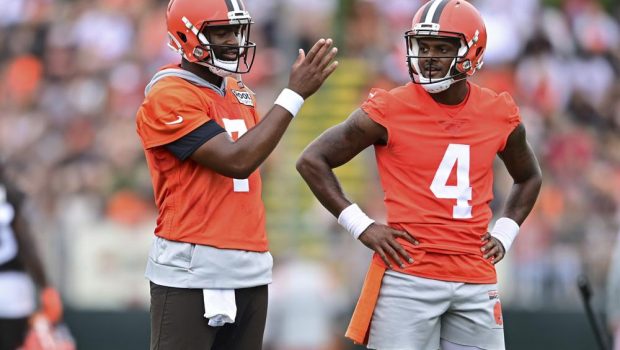 The Eagles face the Browns today in Cleveland in their second exo before their Sept. 11 regular season opener at the Lions.

Philly is a 2 1/2-point fave, but that line is fungible, much like Cleveland’s QB situation.

The Browns are placing their trust in Jacoby Brissett, who has made 37 career starts with New England (2), Indianapolis (30) and Miami (5), to keep them competitive in the AFC North before Deshaun Watson is eligible to return in late November.

It’s a tough ask for the 29-year-old, who is just 14-23 as a starter. But his teammates are confident he can handle it, and owner Jimmy Haslam, general manager Andrew Berry and coach Kevin Stefanski all offered their support after Watson’s suspension became known.

“I got to go out there and prove that every day, right?” Brissett said of the belief in him. “I’m just excited for the opportunity. I don’t take it lightly.”

The Watson suspension hasn’t changed Brissett’s approach, and he said he’s not concerned about outside chatter involving the Browns’ interest in trading for Jimmy Garoppolo or living up to Super Bowl expectations.