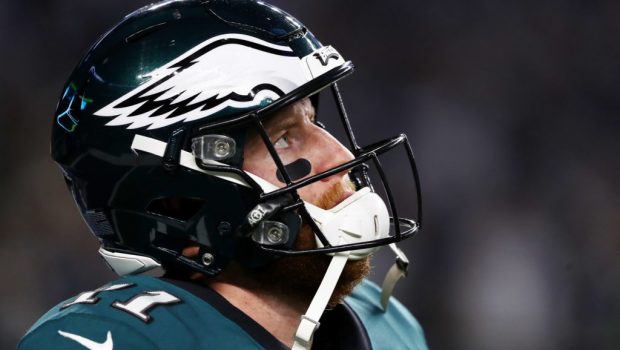 EAGLES AND WENTZ: RIDDLE WRAPPED IN MYSTERY INSIDE AN ENIGMA!

Wrapped in a mystery.

But it pertains to the team that is 14-12 in the regular season since that Super Bowl high.

This season, they are 5-5 and hanging by a thread to their postseason hopes.

It’s only mid-November, and the Eagles — who look dangerous, on paper, when healthy — have blown up all realistic paths to the postseason beyond catching the Dallas Cowboys (6-4) and winning the NFC East. Because the division is still within reach, because four of their six remaining games are against some of the league’s most destitute teams, there is hope mixed with the disappointment. Somehow, the belief still exists that if the Eagles can get their minds and bodies right they have the talent and mettle to beat any team, anywhere.

Carson Wentz is more perplexing than any potential franchise quarterback. Late in the 2017 season, before he tore the ACL in his left knee, Wentz was a 24-year-old MVP favorite. And then the Eagles won the Super Bowl without him. So he was supposed to come back last season and give the franchise an opportunity to enjoy prolonged greatness. While Wentz’s efficiency and productivity have been fine since the injury, his impact hasn’t been the same. And last year, he couldn’t finish the season because of a back injury.

So Nick Foles took over again and led the Eagles to an opening-round victory over Chicago before narrowly losing at New Orleans. Now, Wentz is a $30 million-per-year quarterback, Foles is in Jacksonville, and Phily is fighting at the end of another season to sneak into the playoffs.

It makes the final six games of the 2019 season a period that will define how Wentz is viewed moving forward. He turns 27 at the end of December. The Eagles don’t have the luxury of a backup who can galvanize the team in his absence. Wentz has to prove he is more than a special athlete who sometimes flashes the best traits of Aaron Rodgers and Ben Roethlisberger. If Wentz can’t produce similar to the way he did in 2017 during this stretch run, then that magical 13-game sample will have to be deemed an aberration. Wentz has started 50 games in his career. It’s time to judge his entire body of work without fixating on one set of magnificent performances that represents only one quarter of what he has shown.

Carson Wentz missed Eagles’ last game vs. Patriots. This week, he gets another chance.

But there are more layers to consider. The Eagles don’t feel like a team that has maxed out because Howie Roseman is an aggressive and creative team builder who combines trades, free agency and the draft as well as any executive. The Philadelphia front office has managed to create a fluid salary cap situation. The Eagles rebuilt quickly after the Chip Kelly fiasco, and they never seem to be in a dire situation with the roster despite their high level of activity. So every time you figure the Eagles are growing stale and complacent, they do something fresh. And usually it makes perfect sense.

While the Eagles can’t use injuries as an excuse, they are a legitimate factor. They haven’t had their best players healthy at the same time all season. Wide receiver DeSean Jackson has barely been on the field. The aches of running back Jordan Howard, wide receiver Alshon Jeffery and left tackle Jason Peters have hurt the team. Defensive tackle Malik Jackson went down in September with a Lisfranc injury. Running back Darren Sproles couldn’t stay healthy, and during the 17-10 loss to New England on Sunday, right tackle Lane Johnson suffered a concussion.

Is health the problem? Is it Wentz? Or have the Eagles been overhyped the past two years because we believe all champions have a supply of pixie dust stashed away somewhere?

It’s probably all of the above. The end of this season will make the truth clearer. Whatever the Eagles make or don’t make of these final weeks will determine their reputation moving forward. Is it mediocrity? Or has the giant been asleep and trying to heal all season?

This is Wentz’s opportunity. And this is the moment that the week-to-week Eagles make a statement about whether they are contenders who will chase championships for years to come or just another good team that couldn’t keep its edge.