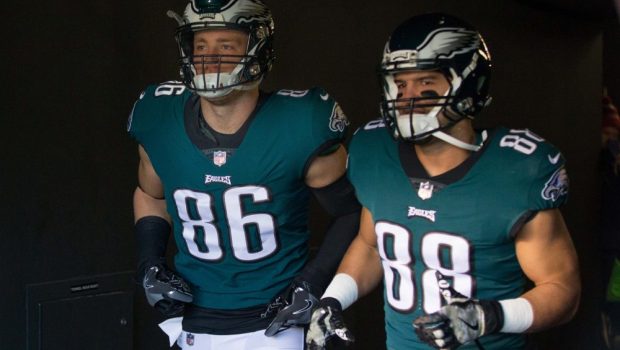 EAGLES AND WENTZ HAVE 2 GREAT TIGHT ENDS: USE THEM MORE!

No matter how you look at it and no matter how many ways the Eagles have tried to diversify their offense, there is no doubt that:

What did work for quarterback Carson Wentz yesterday was hooking up with tight ends Zach Ertz and Dallas Goedert, who accounted for nearly half of the Eagles’ 270 receiving yards.

Goedert led the way with eight receptions for 101 yards and a TD while Ertz caught three balls for 18 yards and he Birds other score.

Wentz and the Eagles were humming early on thanks to their aggressive play-calling, but everything fell apart once the first INT was thrown after the first half’s two-minute warning.

Wentz’s next INT came on the Eagles’ opening drive of the second half and both picks resulted in short-field touchdowns for Washington.

The Eagles could’ve used a running attack to curb their second-half struggles (held scoreless in the second half), but their well-documented injury woes to the O-line caught up with them against a pass rush that had their number.