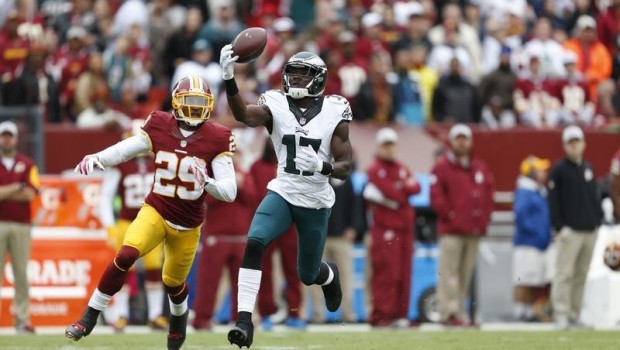 EAGLES AND REST OF THE NFC EAST HAVE LOTS OF HOLES!

The Eagles’ opener with the Cleveland Browns is less than four months away, so let’s see where the holes are in the NFC East.

Eagles — Rookie receiver Nelson Agholor (above) had a disappointing 2015, and the team never found any real competition for him with Josh Huff and Rueben Randle next in line.

This is a roster that has many options at many positions: quarterback, offensive line and tight end included. Sam Bradford has not shown the ability to elevate his teammates and that will be necessary with this receiver crew.

Dallas Cowboys — The offense is absolutely loaded but Dallas’ pass rush is a huge question mark, especially early in the season. Demarcus Lawrence and Randy Gregory face suspension for the first four games of the year, and Gregory has to prove he’s a capable pro. Fourth-round pick Charles Tapper could wind up starting early in the season, with Tyrone Crawford moving over from defensive tackle. Even when Gregory and Lawrence get back, the Cowboys might have to generate pressure with blitzes too often to keep the heat off their shaky secondary.

Washington Redskins — It’s surprising that a team built by general manager Scot McCloughan has so many questions up front. Defensive end Chris Baker is the only surefire starter on the defensive line. They don’t really have a natural nose tackle except for their fifth-round pick Matthew Ioannidis, and expecting him to play big snaps is expecting too much. Stephen Paea was serviceable last year and the team also brought in Kendall Reyes from San Diego. That’s a lot of players without any difference makers.

McCloughan has done a great job improving the Redskins’ roster, starting on offense. The defense has more boom or bust options and has the look of a group that will be in a lot of shootouts this year.

New York Giants — Was the Giants offensive line the problem or was it the underwhelming running backs last year? Shane Vereen checks the box as a quality third-down back, but this team continues to give Rashad Jennings too many chances as a lead back. Fifth-round pick Paul Perkins will have a chance to make a quick impact, and the Giants don’t have an offensive line that can carry the day after failing to upgrade its right side in the offseason.