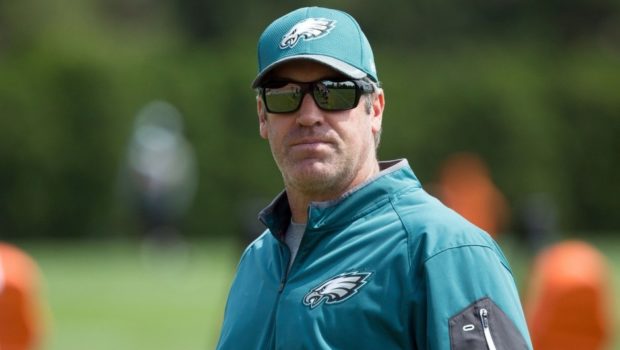 EAGLES AND REST OF NFC EAST HAVE BIG-TIME CAMP QUESTIONS

Today is the first day of Eagles training camp, so let’s take a look at the NFC East teams and figure out what is the focus for each:

Blame the Eagles for investing way too much to keep Sam Bradford before drafting Carson Wentz. They’re stuck with Bradford in the lineup based on his contract and having Wentz sit, with Chase Daniel a pure veteran backup in between. We’ll see how long that plan lasts for Doug Pederson if Bradford struggles when the regular season starts.

While he waits to get cleared of any trouble, Cowboys rookie Ezekiel Elliott will put to work in pads to see how well he can hold as a feature back. Dallas will need to go back to the heavy ball-control scheme of two seasons ago, and its defense has even more holes — starting with end — than it had back then. The Cowboys need to careful and not run Elliott into the ground early.

There are feel-good vibes that Victor Cruz can contribute to the Giants on the field for the first time since 2014. But he will turn 30 in four months, and it’s hard for any wideout to run and cut the same away after major calf and knee injuries. The Giants have rookie Sterling Shepard to start opposite Odell Beckham Jr., and versatile Dwayne Harris also is in the mix. Throw in tight end Will Tye and running back Shane Vereen, and they don’t need much out of Cruz in the slot to keep the passing game humming.

Redskins newbie Josh Norman went from an elite pass-rushing team to a mediocre one that just lost a key piece (again) in Junior Galette. Norman’s presence opposite Bashaud Breeland (and with fellow free-agent newcomer David Bruton) in the secondary will help a unit that ranked No. 25 against the pass last season. But for Norman to have the same impact he did last season, Washington’s front seven needs to overachieve. It’s hard to see that happening.