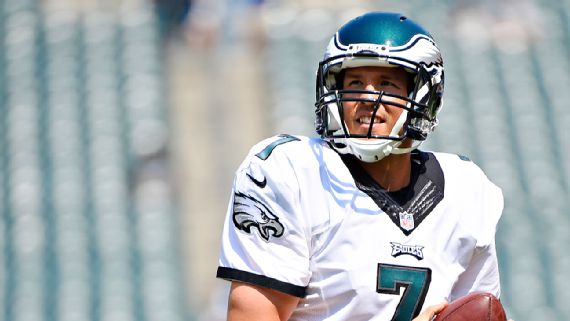 EAGLES AND BRADFORD CONTRACT TALKS: ALL BETS ARE OFF!

So, Sam Bradford will start the 2015 season without a contract for anything beyond.

The Eagles and quarterback Bradford have suspended contract negotiations attempting to commit him to the team beyond the 2015 season.

It has become too expensive for the Eagles to negotiate an additional year or two after Bradford went 10-for-10 with three touchdown passes in Chip Kelly’s offense in his final performance of the preseason.

So despite his injury history, Bradford is prepared to play this season with no contract beyond this year and establish his market value as an NFL starter.

The Eagles acquired Bradford in a trade that sent the Birds’ starting quarterback Nick Foles to the Rams. Bradford has one year left on his original NFL contract and is scheduled to make $12.95 million this season.