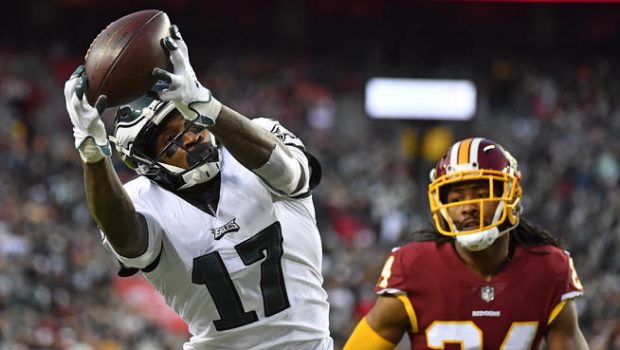 The Eagles Alshon Jeffery is one of the most dynamic and talented wide receivers the NFL.

The caveat is that her has had trouble staying on the field because of injuries.

According to projections from ESPN’s fantasy football site, Jeffery will barely miss breaking the 1,000-yard receiving mark. According to the projections, they believe Jeffery will finish with 74 receptions, 984 yards, and seven touchdowns. While these may seem like low numbers, they would be massive highs for the standout receiver in his time with the Eagles.

If Jeffery were able to live up to the projections ESPN has for him, then he’ll have highs in nearly every category since that time with Chicago.

Of course, the Eagles will be looking for Jeffery to not only stay healthy, but be a major contributing factor to the team. With the NFC East looking somewhat competitive again thanks to the Dallas Cowboys, it’ll be up to veteran leaders like Jeffery to help carry the load during the offseason.

With the regular season fast approaching, it’ll be crucial for guys like Jeffery to contribute, especially if the Eagles hope to make it back to the playoffs and compete for another Super Bowl title.