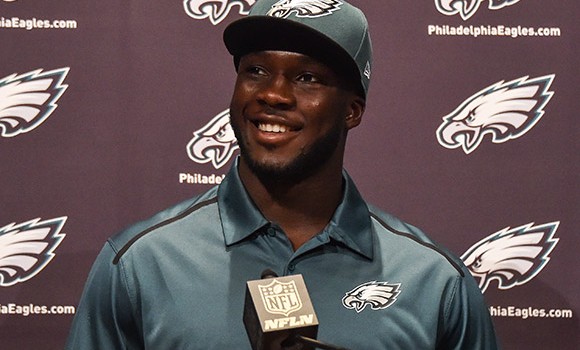 EAGLES’ AGHOLOR A WELCOME CONTRAST WITH DIVAS SHADY AND D-JAX

Even before Eagles fans see what he can do on the field, Nelson Agholor is already a breath of fresh air.

Unlike the contemptible, racially tinged public comments of Shady McCoy and DeSean Jackson’s diva-like quotes about “Shady and me are now on better teams” — Agholor is a level-headed, humble player.

Check out his comments at Eagles’ rookies mini-camp last Friday:

“I think we’re going to do something special here because of the people that are already here,” Agholor said. “It starts with the coaches, and then the players. Those guys love the game of football just as much as I do. I think we’re all going to push each other and we’re going to try and get better.”

“Me telling you today that I want to grow every day as a ballplayer and learn the offense and learn how professionals prepare, those are controllable things,” he said. “It’s not about me going out there and catching 10 passes a game, because those things I really can’t control.

“So how I live is about the easy aspects of life.”

Agholor’s level head extends to all aspects of life. After signing a four-year deal reportedly worth $2.28 million, he’s not necessarily looking to spend.

“There’s been studies after studies about this,” he said. “… Everybody wants to give you advice. For me, it’s about staying in the framework of the things I already know. I know how to be a good person, I know how to play the game of football. Worry about that.

“I have a couple of dollars in my pocket. Hopefully, I’ll let it grow. I’m not worrying about spending the money. I’m worrying about playing the game first.”

As far as that goes, Agholor could just wind up being the best suited to take over where departed wide receiver Jeremy Maclin (85 catches, 1,318 yards, 10 TDs last season) left off.

He attacks press coverage, he said, with a game plan every time.

As the Eagles approach summer, Agholor is going to be doing something every day to get better, and it might just land him a starting job by the fall.