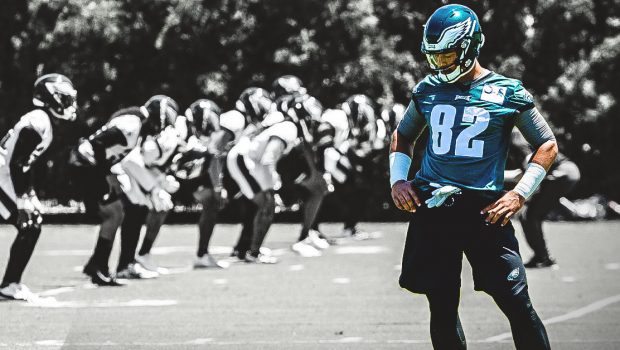 EAGLES ADD TE RICHARD RODGERS TO BACK UP ERTZ AND GOEDERT!

The Eagles have signed signed veteran tight end Richard Rodgers to fill the open spot on the active roster and protected the following practice squad players for Week 1:

Typically, a player on the practice squad can be signed to another team’s active roster. Now, teams have until 4 PM Tuesday during game week to designate the four they wish to keep away from other teams. This is not applicable during the bye week, though.

Teams now have the option to have as many as 55 players on the active roster, as they can elevate two players from the practice squad. They have to do so on the day before the game (or day of the game for Thursday Night Football and Monday Night Football) and no later than 4 PM. The players are automatically sent back to the practice squad without having to be placed on waivers first. However, a team can only do that with a player twice. After two times, a player must sign an active roster contract and be counted against the 53.

With regard to Rodgers, the Eagles have a veteran tight end on the active roster to back up Zach Ertz and Dallas Goedert. Rodgers spent the past two seasons with the team, playing in seven games (47 snaps on offense). In his career, Rodgers has 121 receptions for 1,173 yards and 13 touchdowns in 71 regular-season games. In 2015, he accounted for a career-high eight touchdown receptions. He spent Training Camp with the Washington Football Team where his father, Richard Sr., is an assistant coach. Of course, the Eagles play at Washington this Sunday.