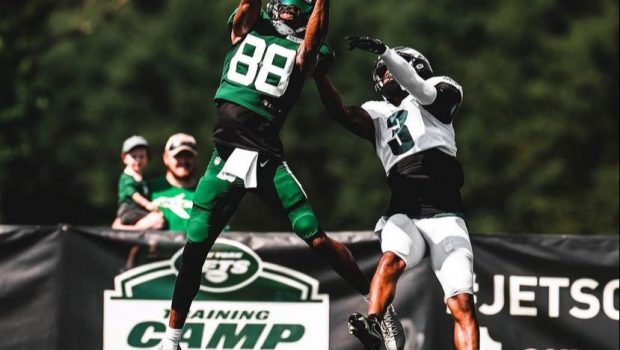 The winless Eagles take on the undefeated New York Jets tonight in the final exo for both teams.

The Birds were drubbed 35-0 by the New England Patriots last week while the Jets defeated the Green Bay Packers 23-14.

New York is favored by four points in this contest. In the last 10 meetings between these teams, the Eagles are 6-4, including a 31-6 victory back on October 6, 2019.

The Philadelphia Eagles were soundly thrashed by the Patriots on Saturday, 35-0. Joe Flacco started for the Eagles, completing 10 of 17 passes for 83 yards. Elijah Holyfield rushed for 31 yards on four carries to lead the offense. Jack Stoll had four receptions for 33 yards as Philadelphia could not get any type of offensive rhythm going.
The Eagles have produced just 16 points while allowing 59 points. The Eagles offense is producing 220 total yards on average in the first two games, just 153.0 through the air. There are clearly a lot of question marks for this offense.The same can be said on the other side of the ball where the team has allowed 450 yards on average to opponents. It has been on the ground where they have been crushed, allowing 181.5 yards per game, as opponents have averaged 43 attempts per game.
Click Here To Comment
0 admin August 27, 2021 Eagles, Gambling