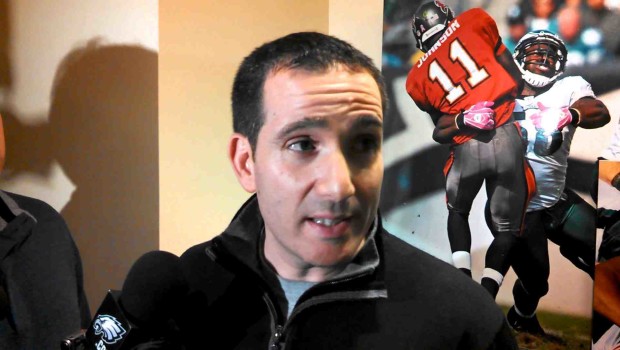 EAGLES $8.7M UNDER THE CAP: BIG-TIME PROPS FOR HOWIE BOY!

As regular visitors to FASTPHILLYSPORTS.com know, we have been especially critical of Howie Boy Roseman, the former Eagles general manager with the fantasy football experience. And we applauded his demotion to whatever his title is now.

But one of his responsibilities is to manage the salary cap, and if Mark Eckel of NJ.com is correct Howie Boy deserves big-time props because:

According to figures from the NFLPA, the Eagles have $8.7 million of salary cap room after adding guard Julian Vandervelde and kicker Caleb Sturgis to the 53-man roster Tuesday.

That $8.7 million, give or take a few thousand, ranks in the top 10 of the league in available salary-cap space. The Jacksonville Jaguars have the most at an amazing $32.7 million, while the New Orleans Saints are barely under the cap at $384,000.

The Eagles are also counting $10.4 million of cap space for players no longer on the team, most notably running back LeSean McCoy ($3.4 million), linebacker Trent Cole ($3.2 million), and guards Todd Herremans ($2.4 million) and Evan Mathis ($1 million).