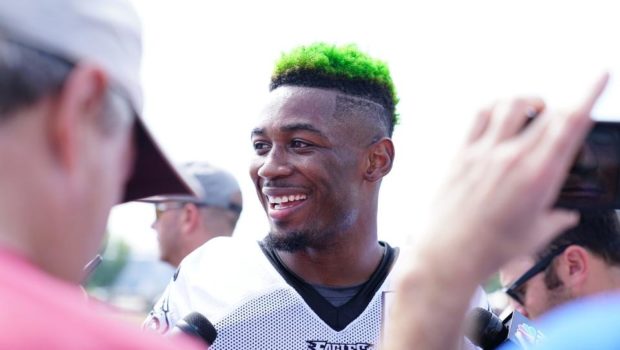 EAGLES’ 7TH-ROUND PICK MILLS LOOKS LIKE A LOCK A NICKEL BACK!

Seventh-round draft picks typically don’t make a splash in the NFL — if they even survive training camp and make a roster.

Jalen Mills, the 20th-to-last selection in the 2016 NFL Draft, is making a name for himself with the Eagles as a nickel cornerback. And it’s not just his green hair that has teammates calling him the Green Goblin that has him turning heads.

The Eagles held their first full-team training camp session inside their practice bubble Thursday afternoon and social media was abuzz over Mills’ performance. The team has yet to put pads on, that will come on today, but in jerseys and shorts, Mills has been sticking out since June.

“I love Jalen’s competitiveness,” head coach Doug Pederson told NJ.com during June’s OTAs. “I love the aggression that he has playing that position and he doesn’t back down from any of our veteran receivers or tight ends or any of the guys that you normally might see on a normal basis might do that.

“He’s challenging guys. He’s got great quickness and transition in and out of breaks; smart kid; eager to learn. Those are things that really have stood out with me.”

Mills’ experience at safety appears to be helping him acclimate to the new position the Eagles have him in. Matching up against the Eagles top receiver, Mills was more than holding his own.

Mills had tight coverage on Jordan Matthews who managed to haul the pass in. However, as the two fell to the ground, Mills was able to knock the ball loose to force the incompletion.

“I like Jalen,” Matthews told the media, also during the early offseason practices. “I feel like he’s extremely competitive and I like his mindset… Jalen’s not afraid. He’ll get right up in my face whenever we’re working plays. If he wants to be physical, he’s going to be physical. He won’t back down.

“After some practices, he’ll pull me aside and ask about getting extra releases. He shows that willingness to work is also there. I like him a lot. I think he’s actually going to play a lot for us.”

Had Mills not had off-field issues while at LSU, he would have been a higher pick in the draft. However, like a few other Eagles draft picks, Doug Pederson decided to take a chance on the corner and this one appears to be paying off early in training camp.

Mills does have some competition to win the starting nickel job. Most notably, JaCorey Shepherd, 2015’s offseason workout MVP has recovered from his ACL injury and is confident he can return to pre-injury form. The Eagles also have 2015 rookies Randall Evansand Denzel Rice looking to make a push for the starting position as well as on-again-off-again Eagle Jaylen Watkins.

One thing that Mills has going for him is that he is the only player of the players listed above that was hand-picked by Pederson and the current Eagles brass.