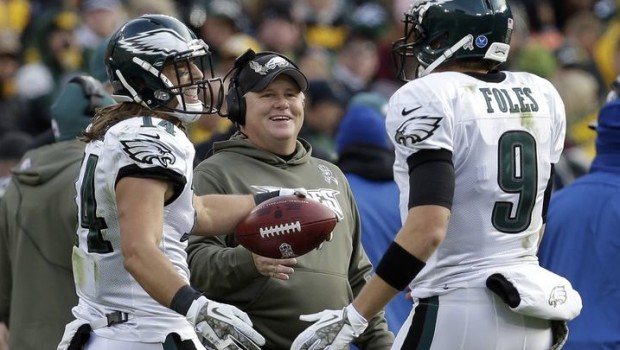 So, training camp has begun and the preseason games begin tonight with the Bill-Giants in the Hall of Fame game in Canton, O.

There is no better time to roll out predictions for the NFC East, brought to you by the Linemakers, a Las Vegas-based betting company.

“It’s the Eagles division to win, but they have a difficult schedule this year,” said LVH SuperBook manager Ed Salmons, a Philly native. “I look for Dallas to implode this year. They did nothing to help one of the worst defenses in the NFL, and as usual, Sean Lee is out for the year. The Giants can’t possibly get worse quarterback play than last year but seem like an aging defense and figure to be around .500 this year.

“The Redskins are a team that I believe should be a real player this year. They remind me of the Eagles from this time last year — a new coach (Jay Gruden) and Griffin was injured all last year. I look for Washington to win the division with Philly second Giants third and Dallas a miserable dead last-place finish.

Who are Vegas books taking the most action on?

“We don’t have much action on the odds to win the division, where we have the Eagles a 7-to-5 favorite,” said the South Point’s Jimmy Vaccaro, who then noticed a bet coming in. “Oh look, we just got a $13 bet on the Cowboys (+375).

“As for the Super Bowl odds, we don’t lose on anything among those (four) teams. We win a little bit on everyone, with I’d say the Cowboys being the least attractive for us. We got Philly at 26-to-1, the Giants at 27, Dallas at 40-to-1, and 47-to-1 on Washington. No risk, no danger with any of them.”

LM outlook: We’re not always kind to the Cowboys just because they continually play below expectations, but they started out 2013 with a bang by covering seven of their first eight games (4-3 SU). The one game they really impressed was in their Week 5, 51-48 home loss to the Broncos while getting 7.5 points. However, a few weeks later, most realized the Cowboys weren’t that good when they lost 49-17 at New Orleans, which started a run of five straight OVERs with their matador defense. They failed to cover six of their final eight games, but they still covered the number more than any other NFC East team.

There just doesn’t seem to be any reason to believe Dallas will be improved from last season, especially defensively where they lost some of their biggest playmakers. New defensive coordinator Rod Marinelli is a very good coach, but he’s not a miracle worker, but they can’t get any worse than No. 32, which is where they ranked last season. Dead Last. Allowing 415 yards per game.

Despite the defense, there seems to be a pattern with extremely poor play in December, and the common denominator since 2006 has been Tony Romo. Another 8-8 season seems likely, which would be the fourth straight year they’ve ended up with that record.

“They have 8-8 written all over them, but they have the talent to be 11-5,” says The Linemakers on Sporting News’ Kenny White.

Key quote. Former Cowboys QB and Fox Sports analyst Troy Aikman, per the Dallas Morning News, on what Dallas needs to be successful in 2014: “The defense is going to be better. They can’t possibly be as bad or worse than they were a year ago. But is it going to be enough? It’s hard for me imagining that being the case, with the injury now to Sean Lee and being out for the season.

“It’s a bottom-line business and Jason Garrett understands that. How many more chances are you going to get if you fail to make the playoffs. For that to happen, they’ve gotta to stay healthy; Tony Romo has to stay healthy. He has to play well. The defense has to be better.”

LM outlook: They were busy with transactions in the offseason, and the offensive line figures to be improved, but they still have the same QB, Eli Manning, who threw 27 INTs. They can’t possibly start 0-6 again, and the discipline of Tom Coughlin is respected in Vegas. Getting at least eight wins should be in the cards, but the value of the opening number of 7.5 is gone.

“Coughlin will never let this year’s team play like last year’s,” says Kenny White. “Manning – 27 INTs – you’re not going to see that happen this year. He’ll cut down on the interceptions. This will be the most improved team, I think, in the NFL this year. … You can bet them in Weeks 1 and 2. They should win their first two games.”

Key quote. Eli Manning, per the New York Daily News, on learning new offensive coordinator Ben McAdoo’s system after 10 years under Kevin Gilbride: “It’s reenergized me. I’m trying to speed up the process of getting comfortable in the new system. I don’t have 10 years. I have a few months.”

LM outlook: Chip Kelly’s high-octane college offense snuck up on Vegas regarding to totals (five of first siz games went OVER), with the numbers peaking with a 58 against the Broncos (52-20 loss), but the Eagles gained the respect of bookmakers when their defense (No. 29 ranked) started playing better and the offense played keep-away – seven of their last 11 games stayed UNDER the total.

A 1-3 or 3-5 start like last season seems improbable. It’s natural for a team to struggle early with a first-year coach, but they sure became a family quickly. Cutting DeSean Jackson in the offseason sent a clear message to everyone in the locker room – and one they all respected. Look for them to win the division again with 10 or 11 wins and be a threat to challenge San Francisco and Seattle for the NFC title.

“This division, I think, is a toss up,” Kenny White says. “I do like Chip Kelly. We’ll see if his offense continues to baffle NFL defenses. That usually doesn’t happen, but I think for at least one more year it actually will.”

Key quote. LeSean McCoy, appearing on Rich Eisen’s podcast, regarding Darren Sproles: “Sproles has the quickest feet I’ve ever seen out of any player. He’ll help us out tremendously. I think the best thing about him, what he brings to this team is not only leadership and experience, but also just another big playmaker on the team. You talk about losing DeSean, but I think (GM) Howie (Roseman) and Chip did a great job of bringing another playmaker to our team.

“With me and him in the backfield together it will definitely cause an issue with the defense.”

LM outlook: They were one of the hardest teams to make spreads on during their eight-game slide (2-6 ATS) to close out 2013. No matter how low a rating put on them, they’d play at an ever lower level. Bad offense, and an even worse defense, marked a a complete change from the final half of the 2012 season that spurred them into the playoffs. New coach Jay Gruden has some great offensive talent to work with, but getting more than seven wins seems like a stretch, even though bettors have taken the season win total up from 7 to 7.5.

Says Kenny White, “I have the Redskins rated lowest in the division, but I actually think the Redskins have a shot to make a run because I think RG3 will be a lot better in year three at 100 percent, and I think he’ll get along with Gruden.”

Key quote. Griffin III, on what player is the Redskins’ biggest weapon: “I think everyone would lean towards DeSean or Pierre (Garcon) or Jordan Reed. I think it’s Alfred (Morris). With him, defenses have to make a decision whether to put guys in the box to stop him or leave the box light and allow Alfred to go between the tackles and lure in the safeties. I think it will be interesting to see what defenses do against him.”

LVH Games of the Year

It’s always fun to see whose ratings rise and fall during the season. If the Eagles have a great season and improve upon 2013 while the Giants struggle under new offensive coordinator Ben McAdoo, the rating differential between the two teams will drastically change by the middle of the season. So while the LVH has Philly about 2-points better on a neutral-field – which makes the Eagles -5 at home against the Giants on October 1 – if things go as handicapped, the rating figures to widen to maybe 3.5-points by the time they meet again on December 28, where the Giants opened as a 1-point favorite. It’s not much of a difference, but you get the idea, and the bottom line is to try and get the best number. So when that late season game comes around and everyone is laying 2.5 points with Philly, you can look like the smart one holding a ticket that shows Eagles +1.