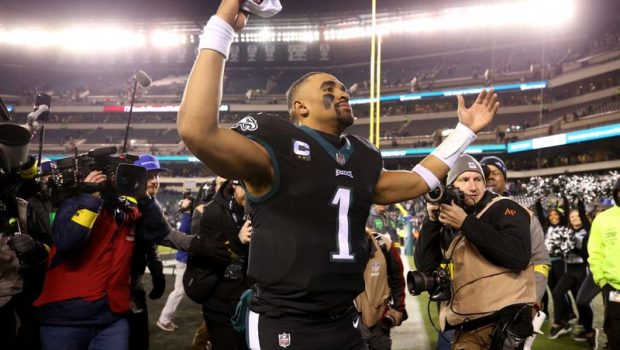 Everybody’s got an opinion on tonight’s Eagles-Giants game.

“It will be closer than people think,” another executive said.

“The Giants will make it interesting, but the Eagles receivers have the advantage over the Giants defensive backs.”

The Eagles have won three in a row against the Giants, including a 48-22 victory in Week 14 and a 22-16 win against many Giants backups in Week 18. Hurts was 20-of-35 for 229 yards and an interception along with nine runs for 13 yards in his return from injury in that Week 18 game.

“The Eagles are tough,” a coach said. “But it’s hard to beat a team three times (in one season), and the Giants wouldn’t surprise me if they showed up with an upset.”

Jones was terrific in his playoff debut against the Vikings, completing 24 of 35 passes for 301 yards and two touchdowns along with 78 rushing yards. But the Vikings defense allowed the fourth most points and second most total yards in the league while the Eagles allowed the eighth fewest points, second fewest yards and the fewest passing yards in the regular season.

The Eagles, behind Hurts’ breakout campaign, had the third-highest-scoring offense this season.

“The Eagles offense will come through in the end,” a coach said.

Caesars Sportsbook promo code NJSPORTSBETFULL gets you up to $1,250 in free bet credit.