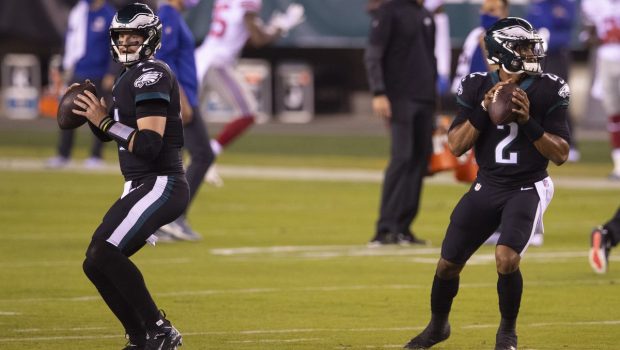 EAGLES 7 1/2-DOGS AT PACKERS: HOW ABOUT STARTING JALEN HURTS!

The Birds season isn’t over — in fact they are still in the race for the NFC East title, WFT and the Giants lead with 4-7.

But they look like they are dead from the neck up.

So how about rewarding the fans and starting Jalen Hurts at quarterback!

There were reports leading up to the game that Hurts would get on the field with Carson Wentz on the sidelines, perhaps for multiple plays in a row.

Yet Hurts got in for just two plays, both in the first half. Hurts had 31 snaps in the previous nine games.

The first play came to start the second quarter. But this was different because for the first time, Wentz was on the sideline. The Eagles were called for a false start, so that didn’t count.

Hurts stayed on the field for the next play, and completed a 6-yard pass to Alshon Jeffery.

It was Jeffery’s first catch of the season.