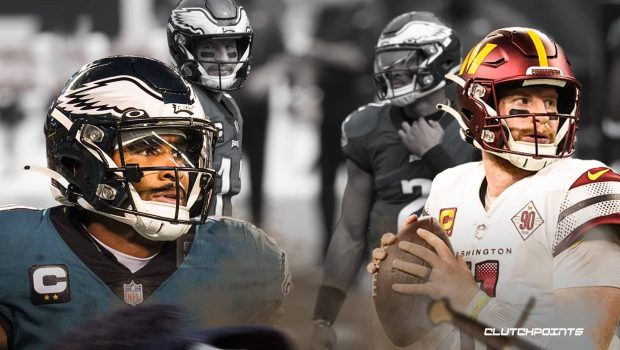 EAGLES 6 1/2-FAVES AT COMMIES, AND THAT SEEMS WAY TOO LOW!

The Eagles averaged 470.5 scrimmage yards per game in their first two games, the most in the NFL.

And it looks like Jalen Hurts has taken a leap in the offseason. He’s now moved up to the third favorite in MVP betting. He’s already passed for 576 across two games with a touchdown, and he has the seventh-best QB rating in the NFL. It’s on the ground where he’s come alive with 147 yards and three touchdowns.

Miles Sanders looks to have earned the trust of his organization and has averaged 5.9 yards per rush, totaling 176 yards.

Hurts’ other weapons have also excelled, with A.J. Brown looking like he could be the piece that takes this offense over the top. Brown has 224 receiving yards despite not finding the end zone yet.

As for the Commanders, did anybody expect Carson Wentz to be second in passing yards through two weeks of the season? The former Eagles QB has been impressive so far, passing for 650 yards and seven touchdowns.

It’s noticeable that he still has three interceptions, tied for third highest in the league, though.

Only five teams, including today’s opponents, have averaged more scrimmage yards per game than the Commanders. They’ve not excelled on the ground, but their pass catchers have been great with Terry McLaurin (6-133-1), Curtis Samuel (15-133-2) and Jahan Dotson (7-99-3) taking the team to another level.