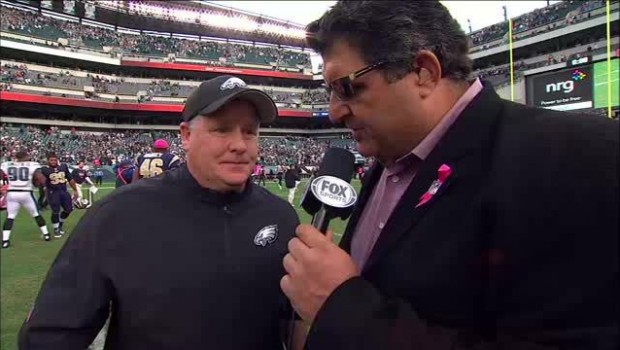 Kelly threw Siragusa’s snide remark — “Sometimes they’re not pretty” after the Birds went 4-1 — right back at him, “No, like your shoes.” And he should do the same to all the know-it-alls on radio who says the Eagles are a “soft 4-1”

Some years back, former Eagles linebacker and radio talk show host Garry Cobb was listening to a caller rant about how poorly the Eagles were playing, and he stopped him.

“Do you live in Negadelphia”? Cobb asked calmly.

Many so-called Eagles fans still take up residence in that lonely place, spewing their bile for all to hear.

It’s still being heard today directed at the 2014 Eagles.

The fact is, the Eagles are 4-1, tied for the best record in the WHOLE NFL! They have had a rash of injuries along the offensive line that would decimate most teams. And yet the Eagles have endured.

If the playoffs were to start today, the Eagles would have the No. 1 seed in the NFC. So why the negativity?

It sells, at least on the radio dial.

These charlatan talk show hosts — Barkann, Missanelli, Ellis, Mayes, Macnow, Cataldi — stoke the perceived fragile psyche of the Philly sports fan for all it’s worth. Ratings are better when they are losing. If they are winning, talk as if their losing.

It’s a con game, but the facts tell a different story.

I guarantee you the 25 NFL teams fan bases ranked below the Eagles today would love to switch places if they could. But here it remains an odd sport being played out on the airwaves, day and night.

It’s an outrageous deception, but it continues.

They break QB Nick Foles’ onions for not being better, morning, noon, and night.

Fact is, Foles’ record as a starter under coach Chip Kelly is 12-3 — 4-1 this season. What’s the problem? Oh yeah, they have to win these games by more points, just winning the game is no longer good enough?

Kelly shot back after looking down, “No, like your shoes.”