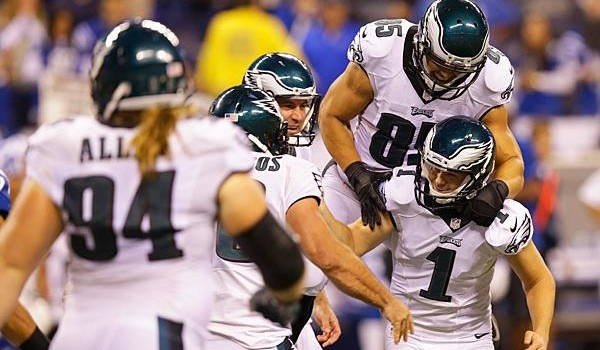 EAGLES NO. 3 IN NFL POWER RANKINGS, AND HERE’S WHY

If you listen to the naysayers the Eagles are in awful shape headed into Week 3 because they have fallen way behind in the first two games before coming back to win.

Against the Colts on Monday night the Eagles played eerily similar to their first half against the Jaguars the week before: Nick Foles and the offense sputtered, having to settle for field goals in a game where touchdowns were needed to win.

Luckily, for the second week running, they had Superman Darren Sproles to come to the rescue — on a 19-yard TD run, Spoles was shot from a cannon as a thing of beauty hurling himself into the end zone. He also took short passes from Foles for 57 yards and 51 yards on majestic sprints down the field.

After two weeks, the Eagles are averaging a league-leading 32 points per game, amassing 458 total yards versus the Colt’s. The two reserve lineman did a nice job, according to coach Chip Kelly. It’s possible the shaky starts can be attributed to the upheaval on the offensive line.

The defense had some big turnovers, an interception and a fumble recovery. But with the game hanging in the balance, the Colts had possession of the ball on their own 20, with 3:23 left in the 4th quarter. The Eagles got a 3 and out — 3 plays for 5 yards — and forced the Colts to give the ball back to the Eagles, forcing Andrew Luck off the field, giving the Eagles the ball with a chance to win the game.

In a bit of irony, an Eagles equipment manager told kicker Cody Parkey, “Your going to hit the game-winner” — then it happened, twice, with the Eagles escaping Indy with a 30-27 thriller going 2-0 to start the 2014 season.

Oh, by the way, the Eagles have climbed the NFL power rankings to No. 3 after two weeks of play, behind the Broncos and Bengals.