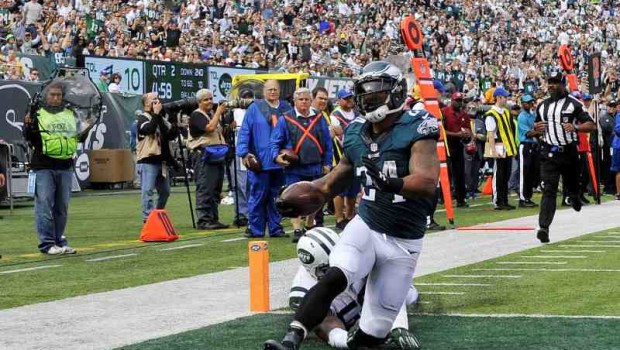 Ryan Mathews ran for 108 yards and caught this touchdown.

Something was happening here, and from the moment it was very clear that the Eagles would win their first game of the NFL season yesterday at the Meadowlands.

You didn’t have to know the lyrics to Buffalo Springfield’s classic to see that the Eagles, who weren’t in Philly because Pope Francis was, played like a winner.

The Eagles needed a win to stop the bleeding of the first two weeks and they got it by holding on for a 24-17 win that saw the Jets score the final 17 points of the game after the Eagles raced out to an early lead.

It was hardly a wild rush back for the Jets, who struggled to generate any kind of offensive consistency while turning the ball over four times but remained alive because their defense didn’t let things get out of hand.

Ryan Fitzpatrick threw three interceptions and Brandon Marshall lateraled to no one for a first half turnover as the Jets seemed to be trying to give back all 10 of the turnovers they forced in the first two weeks of the season. There were plenty of chances for them to get back into the game, but they blew almost all of them in one way or another to lose for the first time this season.

As a final exclamation point on what kind of day it was for the Jets, linebacker Quinton Coples was flagged for illegal hands to the face on a third-down play with just over a minute to left to hand the Eagles the first down they needed to run out the clock. It was a win the Eagles deserved for their performance on defense and special teams, but it did not provide the total reprieve for the offense that they probably hoped to achieve.

The Eagles picked up just 67 yards after halftime and the penalty-aided first down was only their third in the final 30 minutes, which made the game look a lot like the one they lost to the Cowboys in Week Two. Ryan Mathews did run for 108 yards on 25 carries, so it wasn’t a replay of that game but both teams’ offensive issues didn’t make for an attractive game to watch. Sam Bradford’s 14-of-28 line and a Mathews fumble in the fourth quarter were among the lowlights for the Eagles.

Mathews’s fumble wound up not hurting the Eagles because Brandon Bair tipped a pass that rookie Jordan Hicks intercepted, but the repeated chances the Eagles offered the Jets because of their offensive futility kept the game in doubt far longer than it should have been. It didn’t come back to bite Philly this weekend, but winning with an offense that generates just 231 yards isn’t generally the best approach to employ.

That said, a win is a win and the Eagles needed one badly. They’re in a division without any great teams, which buys you time to get on track even after losing the first two games of the season.