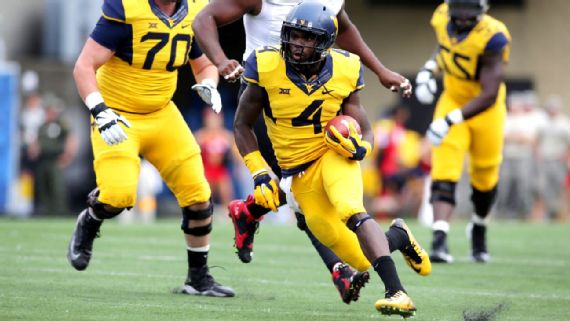 First round: Carson Wentz, QB, North Dakota State: The plan, at least for now, is for Wentz to sit and learn behind starter Sam Bradford. That could change if Bradford never comes back. Then again, Chase Daniel would likely be the starter in that case.

Third round: Issac Seumala, OL, Oregon State: Coach Doug Pederson said Seumala would challenge for a guard spot. But most scouts feel his best position is center. He could be the eventual replacement for Jason Kelce.

Fifth round: Wendall Smallwood (above), RB, West Virginia: Depending on how quickly he picks up the offense, Smallwood could be an immediate contributor as a third-down back at least. The best case scenario is he splits time in the backfield with Ryan Mathews.

Fifth round: Halapoulivaati Vaitai, T, TCU: “Big V” as he prefers to be called looks like a definite project, which is fine for a fifth-round pick. Some even think he’ll be better off moving inside to guard.

Sixth round: Blake Countess, CB, Auburn: The talented, but undersized (5-9) cornerback could make an immediate impact on special teams and if he plays the way he did in college could find his way into sub packages on defense.

Seventh round: Jalen Mills, DB, LSU: Mills isn’t fast enough to play outside in the NFL. He could be a backup safety or challenge for a spot as a slot cover guy. But there is a lot of competition there.

Seventh round, Alex McCalister, DE, Florida: The troubled pass rusher has to mature on and off the field to have a shot. With some depth at the position, a year on the practice squad might serve him well.

Seventh round: Joe Walker, LB, Oregon: The team’s final pick and anther Duck actually has a shot to make the roster if he can show he can be a good special teams player. The roster is very thin at outside linebacker.