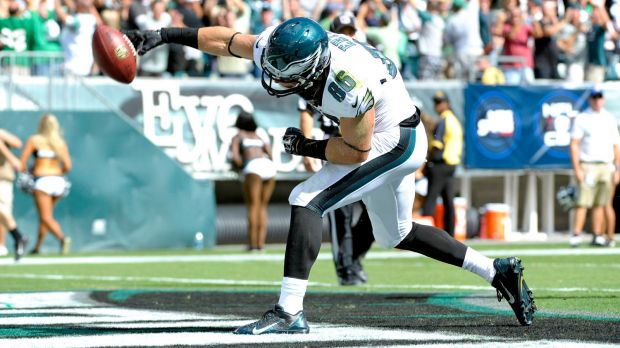 With all the talk at Eagles training camp about the competition at quarterback between Sam Bradford and Mark Sanchez (that ship has sailed!) and on the O-line and the secondary, one position has flown under the radar:

Zach Ertz is making a real push to supplant Brent Celek as the starting tight end.

Ertz was on the field in just 50.3 percent of the offense’s 2014 snaps, a slight increase for the 40.5 percent he saw his rookie season, but not enough. Ertz finished with career highs in receptions and yards, with 702 receiving yards on 58 catches. He ran a pass route on nearly four out of every six total snaps, per Pro Football Focus.

The most important thing Ertz can do to see more snaps is demonstrate improvement as a blocker. Because incumbent started Celek was such a proficient blocker in 2014, Kelly simply couldn’t replace him with Ertz.

Ertz has taken all of the right steps to become a better blocker this offseason. He focused his attention on blocking for the early part and majority of his training.

Later, he found time to meet with future Hall of Fame tight end Tony Gonzalez. Ertz credited Gonzalez for helping him develop a better understanding of route running, coverages and how to develop an everyday routine.

According to Pro Football Focus, Ertz may not be that far off from proving himself to be a proficient blocker. The charting and analytic website named Ertz their “secret superstar” last month. According to PFF’s J.J. Ziegler, Ertz “didn’t allow a pressure in the second half of the season and posted a +0.5 as a a pass blocker.His run blocking was also encouraging, improving from a first half grade of -0.2 to an impressive second half grade of +4.3.”

Another way for Ertz to make it more difficult for Kelly to take him off the field is by proving to be one of projected starting quarterback Sam Bradford’s favorite options in the passing game. According to early spring practice reports, Ertz and Bradford have already developed a strong rapport.

Earlier in June, Eagles running back Darren Sproles predicted that Ertz is on the verge of becoming a superstar. For Ertz to be considered correct in his assessment, one of two things need to happen. In the first scenario, the Eagles have to utilize more 12 personnel packages than they ever have under Kelly, featuring an extra tight end over a wide receiver. In the other scenario, Ertz would start taking more of Celek’s snaps as the one tight end in 11 personnel packages.

When you consider Kelly’s offensive scheme and play-calling history, the first scenario seems less likely than the second. Celek is still performing at high level, particularly as a blocker, but if Ertz can prove to be nearly as efficient of a blocker, he will start taking Celek’s snaps. At this stage of their careers, Ertz is the much more dynamic option in the passing game. A true breakout for Ertz finally seems on the cusp of happening.