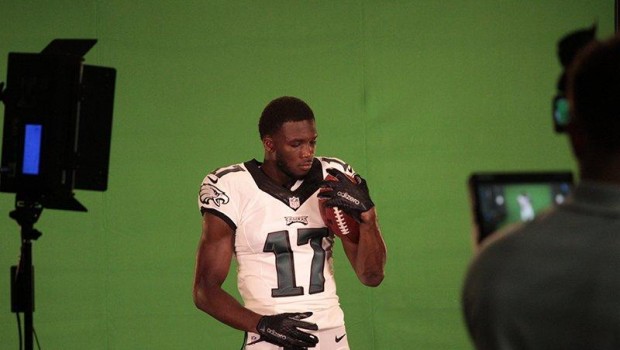 MATTHEWS ON EAGLE WR AGHOLOR: ‘THAT’S A KID THAT GETS IT’

Eagles rookie wide receiver Nelson Agholor is either the hardest-working guy at the team’s OTAs or he is world-class suck-up.

He takes a taxi to work that allows him to bypass the regular rookie shuttle, which, in turn, allows him to be one of the first players to arrive at the Eagles’ team facility each and every morning.

“You hear a lot of great things, but then we you actually get him on the field and see what type of guy he is, you’re like OK this kid gets it,” teammate Jordan Matthews said on the 94WIP Morning Show. “Instead of taking the regular rookie shuttle, he takes a taxi to get here early to the facility. That’s a kid that gets it.”

Agholor was selected by the Eagles in the first round of the NFL Draft. With Jeremy Maclin, who led the team’s receivers last season, now in Kansas City with the Chiefs, Agholor should plan on contributing immediately. Maybe that’s why, according to Matthews, Agholor is taking his preparation seriously.

“He’s been really aggressive with his studies,” Matthews said. “He’s always hitting me up, if he needs like signals. If he needs information, he calls me whenever and then we’re able to talk over it. And we haven’t even gotten to how he is on the field. This kid is explosive.”

Agholor is known to be quick on his feet, so he should fit in with Chip Kelly’s system. In his final season at USC, Agholor racked up 104 catches with 12 of those receptions going for touchdowns. He’s clearly talented, and appears to be more than willing to work at his craft.

And, considering the amount of success Matthews had in his first year — Matthews caught 67 passes and eight touchdowns in 2014 — it’s easy to see Agholor also putting together a solid rookie campaign.

“I’m not gonna ruin it for anybody,” Matthews said of Agholor’s abilities. “I just want everybody to see how talented he is.”