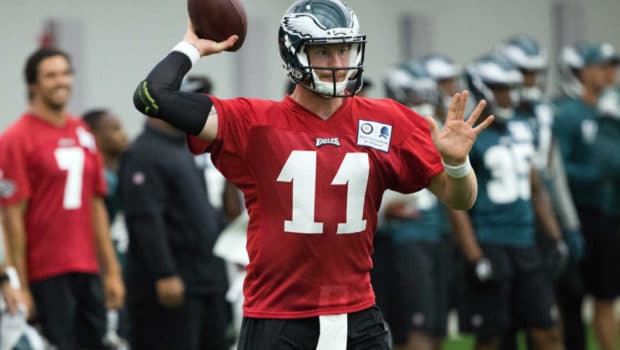 EAGLE WENTZ’ SLOW RELEASE MAY GIVE BROWNS A LEG UP TOMORROW

“He can run, he has good mobility, and he’s got a good arm,” said Nassib, an All-American from Penn State. “His release is a little slow, so we plan to take advantage of that.”

Overall, “I think they’re going to keep things basic for him, but I’m just going to go out there and play as fast as I can and pressure him as much as I can, make him uncomfortable.”

With a hairline fracture of the rib, Wentz might not run as much as he would normally, Nassib said.

“He’s a dual threat, but I heard he’s a little banged up right now, so I doubt he’ll be running the ball very much,” he said.

He said he plans to run after him as much as he can.

“We’ll see who gets tired first,” he said.