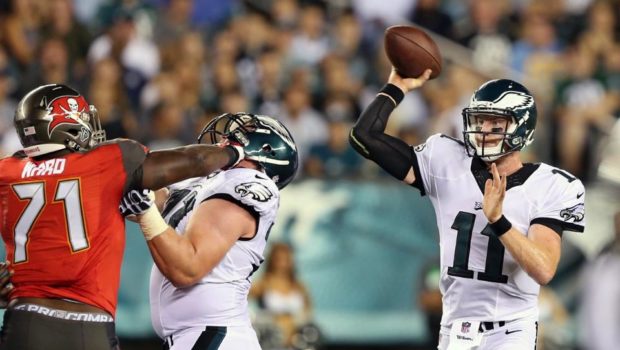 There’s no way to know how many of the sweltering Eagles fans who came to the Linc last night came just see the Eagles’ prized rookie quarterback.

And there were times when Carson Wentz looked calm, and poised, and like he might actually be the quarterback of the future for the Eagles.

Playing behind a sketchy set of offensive linemen and in an offense that lacks playmakers in the starting group, the second pick in the draft had a decidedly so-so debut.

Wentz was 12-of-24 passing for 89 yards and threw an interception, which taken without context is a pretty shabby stat line. But he also was the victim of several drops, moved the Eagles downfield well (before the pick in the end zone), and flashed some athleticism, though his attempt to hurdle a Buccaneers defender led to him flying upside down. There were also the requisite chants of “We Want Wentz” from the ever-patient Eagles fans, though they’re going to have to wait.

“It was fun,” Wentz said in quotes distributed by the team. “The first opportunity I had I’m running the two-minute drill, so I enjoyed that. I hadn’t had a ton of reps of it in practice, but it was fun out there. I was finally able to take some hits. It’s been

“I was finally able to take some hits. It’s been a while since that’s happened. Overall, I had a lot of fun out there and there are definitely some things to improve on for myself and as a team. But it was enjoyable.”

There was plenty to improve as a team, as backup quarterback Chase Daniel took four sacks, making it a little risky to put the guy they’ve mortgaged their future in there for long. But mostly, it was a positive debut.

“He came out. He was in the right frame of mind, excited, looking forward to playing,” coach Doug Pederson said. “Made a couple tough runs for us, which we needed, and then completed the ball where it needed to be.

“By no means is he perfect or was anybody perfect tonight. But pleased for his first outing and we’ve just got to continue to work with him on a daily basis and get him where he needs to be.”

Of course, the ultimate destination for Wentz lies somewhere beyond 2016, as the Eagles have made it clear this is a red-shirt year, and that Sam Bradford is the short-term starter.