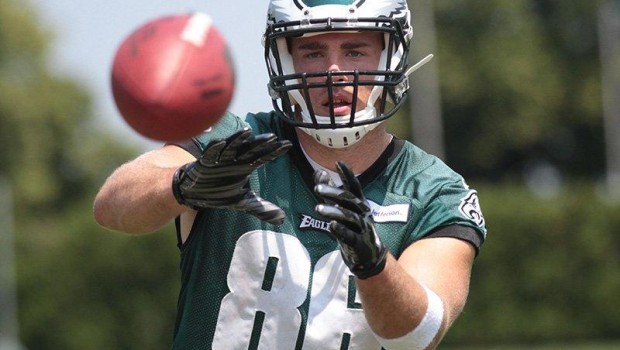 EAGLE TE ZACH ERTZ ON MATHIS: ‘OUT OF SIGHT, OUT OF MIND’

If Drew Rosenhaus and the rest of Team Evan Mathis were counting on other Eagles to come to the aid of Mathis’ ill-considered fight with Eagles Supreme Leader Chip Kelly, think again.

Thanks to Phillymag.com’s Tim McManus, here is what tight end Zach Ertz (above) said yesterday:

“I hate to say it, but a college coach of mine said, ‘Out of sight, out of mind’, and that’s kind of what we have. We have a very good group of offensive linemen. I have a lot of faith in them. Obviously I love Evan, I wish he was here, but at the same time we’re focused on the guys that are here.
“At the beginning of the offseason guys would talk about it, but now that the grind is going ,and we’re running our butts off each and every day. We’re focused on the guys that are out here.”
Mathis has been absent for the entire offseason program to date. OTAs are scheduled to wrap on Thursday. Attendance has been optional to this point. Next week’s minicamp (June 16-18), however, is mandatory. Mathis faces a maximum of $60,000 fine if he decides to skip the three-day program.

“If he doesn’t show up and says it’s all about money, it’s going to be… the writing is on the wall in that sense,” said Ertz. “How can you say it’s all about money and then miss out on 60 G’s when you get fined? I mean, it is what it is. We’re not focused on Evan Mathis being here or not being here right now, we’re focused on getting better as a team and individually right now.”