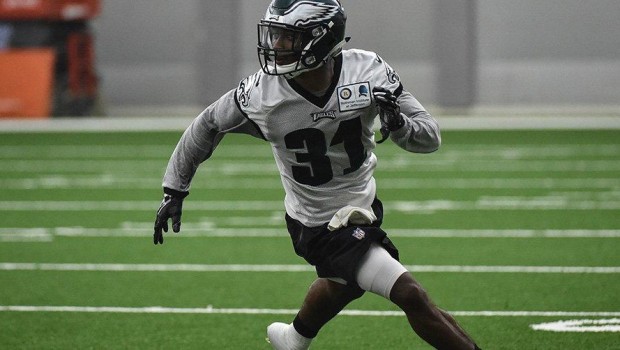 EAGLE ROOKIE CB JALEN MILLS’ PAST IS AN ISSUE TO SOME

Eagles rookie cornerback Jalen Mills has a burden above and beyond his chances to make the team on the field.

Seventh-round pick Mills, charged with assaulting a female in 2014 while at LSU, spoke to reporters at rookie minicamp about the situation.

“The girl — basically it was her word vs. mine. Domestic violence is very serious around the [United States], so women, nine times out of 10, they usually get the upper hand until you go to court,” Mills told the Inky.

But it was more than a he said/she said. The alleged victim had corroborating witnesses — including someone who picked Mills out of a lineup.

“She had witnesses, but I had several witnesses, as well, too,” Mills said. “So we just carried on until the process was dropped.”

Originally, Mills faced one count of second-degree felony assault. The charge later was reduced to misdemeanor assault, a decision that created some controversy in and around Baton Rouge (and which prompted the prosecutor to suggest that the charge wasn’t actually reduced, even though it clearly was). During the preliminary hearing, Mills’ lawyer claimed that the punch had been thrown not by Mills but by his girlfriend.

Mills entered a diversion program not long before the case was set to go to trial in April 2015.

At a minimum, Mills is guilty of trying to minimize the incident by incorrectly calling it her word and against his and then suggesting that women who accuse men of assault “get the upper hand” in nine out of 10 cases.

And even though he ultimately paid only his legal bills and the alleged victim’s medical bills, the incident apparently cost him plenty of money by contributing to a slide that saw him go from possibly a fourth-round pick to a seventh-rounder.