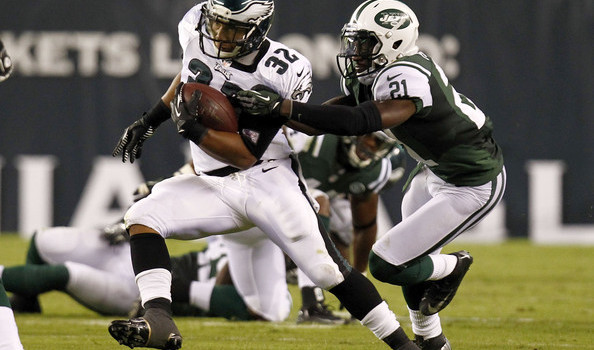 Looked who showed up at the NovaCare Complex yesterday?

Eagles’ running back Chris Polk (photo above in 2012 games against the Jets), who made the roster as the third back behind LeSean McCoy and Darren Sproles, had been sidelined with a hamstring injury. His return helps alleviate concerns that the Eagles would enter the opening game against the Jaguars Sunday with only two healthy running backs on the roster.

Huff has been sidelined since he suffered a shoulder injury on a kickoff return against against the New England Patriots in the team’s second preseason game.

Should Huff be unavailable Sunday, Kelly said that veteran cornerback Nolan Carroll would handle kick return duties against the Jaguars.

Tobin injured his left ankle in the preseason finale against the Jets last week.