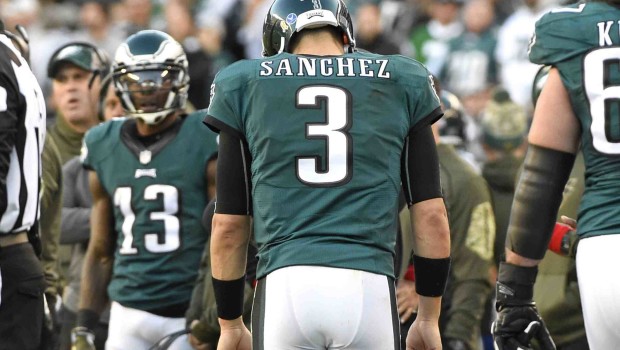 EAGLE QB SANCHEZ, A PICK MACHINE, NOT WORTH A FANTASY PICK

So, Mark Sanchez will drag his ass onto the field at the Linc Sunday as the Eagles’ starting QB in place of Sam Bradford,

Bradford suffered a separated shoulder and concussion in the Eagles’ disappointing loss to the Dolphins.

That could be a blessing or a curse for fantasy owners.

Sanchez knows the Chip Kelly system and seemed to have a nice command of the offense last week. But then Sanchez pulled a Sanchez – he committed a mind-boggling turnover, a problem that has bedeviled him his entire career.

The bottom line: Don’t expect a huge drop over Bradford if you possess Philly offensive weapons like DeMarco Murray and Jordan Matthews, but it wouldn’t be the craziest thing in the world to stream defenses going up against Sanchez because of his propensity for turnovers.