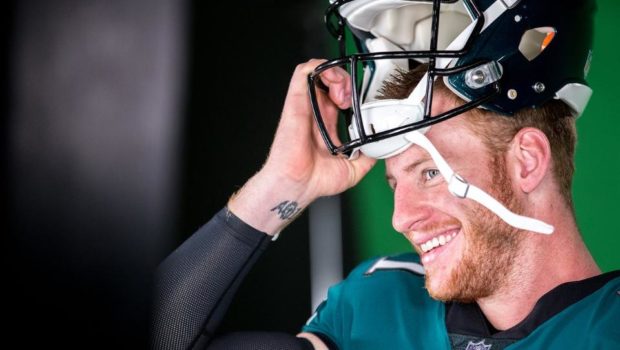 HOW EAGLES QB CARSON WENTZ HAS WOOED AND WON THE FAN BASE!

When Wentz first appeared on WIP, he sounded robotic, rehearsed, cliché. Then the Eagles traded Sam Bradford, Wentz became the starter, and the team started 3-0. Over the course of the season, Wentz started opening up during interviews, talking more about his maturation process, specifically tapping into the blue-collar identity of the city. “He’s good at [showing] how much it means to him,” Jon Ritchie, the former Eagles fullback who now has a show on WIP, told Sports Illustrated. “It means so much to us as fans, and when you’ve got a guy, leading the team, that it means that much to as well, you feel a real bond there. You feel like you’re working together with this young man, witnessing the growth, and feeling a pride in the growth. Like you’re a part of the team. He’s able to engender that sort of reaction from the fans, which is very savvy. He’s young, but he’s got a great grasp of what makes this town tick.” ‘GIVE ME 1 MORE SECOND’: HOW HURTS INSPIRED MAILATA!