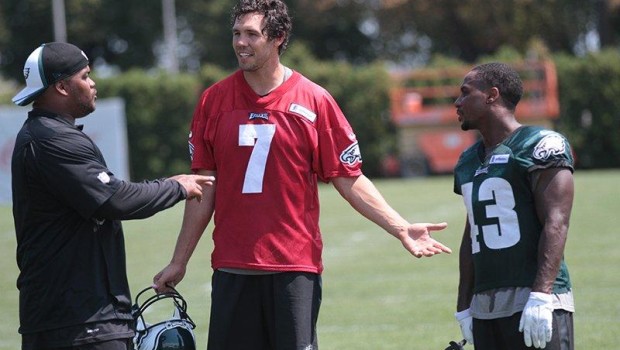 EAGLE QB BRADFORD — NO LIMP LIKE A GIMP — SHINES AT PRACTICE

And yesterday at the NovaCare complex was no exception.

New Eagles quarterback Bradford rolled out to his right on one red zone play to hit Josh Huff in the end zone for a touchdown.

And he didn’t limp like a gimp doing it!

Later in practice, Bradford ran to his left and fired a pass into tight coverage that was knocked down by a defensive back. It’s to be expected that the right-handed Bradford would have a more difficult time throwing while on the move to his left.

Overall, Bradford looked really sharp once again. He didn’t make a ton of flashy throws but he was repetitively accurate. He consistently made good decisions and imposed his will on the defense.

Bradford hit Huff and Miles Austin for touchdowns during the red zone within a few plays of each other.