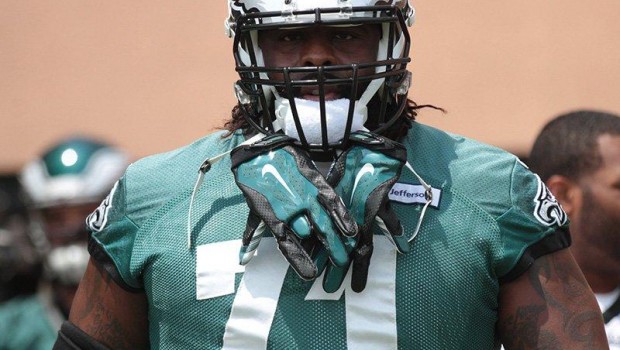 EAGLE PETERS: ‘I GOT SAM’S BACK NO MATTER WHAT, RIGHT OR WRONG’

After all the argle bargle about Raven Terrell Suggs’ cheap shot on Eagle QB Sam Bradford last Saturday night, it is nice to see that Sudden Sam’s immediate defender in the media has been recognized.

“He came up to me today and told me, ‘Thank you,'” Jason Peters said after yesterday’s practice. “I told him I’ve got his back no matter what, whether it’s wrong or right.”

On Saturday night, Peters expressed the Eagles’ perspective on the hit Bradford took from Suggs. Peters called the hit a “cheap shot” and said that, after three days of practicing together, he believed Suggs targeted Bradford’s surgically repaired left knee on purpose.

Ravens coach John Harbaugh criticized the Eagles for their comments about Suggs.

“When you start popping off about somebody’s character, you cross the line,” Harbaugh said Monday. “That’s not really something that we would respect.”

Peters has been called a future Hall of Famer by his head coach, among others. The big left tackle is a cornerstone of an Eagles team with high expectations for 2015.

But in his 11 seasons in the NFL, Peters has never played on the winning side in a playoff game. He has never been beyond the first round.

“Right now, we’re looking real sharp,” Peters said. “Had two good preseason games. We’ve got to build. We can’t really get too comfortable. We’ve got to keep putting points on the board, keep the defense off the field.

“We’ve got plays to protect Sam,” Peters said. “We’re going to run those. It’s the preseason. We’re trying to see different looks and it so happens Suggs hit him low. We’ve got different plays we can call.”