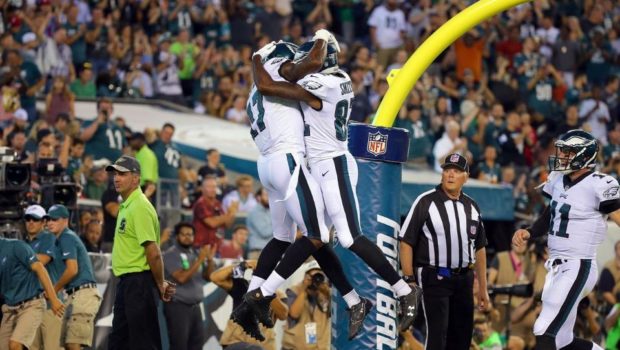 EAGLE NEWBIES JEFFERY, SMITH AND BLOUNT HAVE REMADE THE ‘O’!

When the Eagles take the Fed-Ex Field Sunday against the Redskins in Washington, the FOX TV audience may have to adjust their flat screens for:

The New Faces of 2017 — Alshon Jeffery, Torrey Smith (above) and LeGarrette Blount.

The Eagles have surrounded quarterback Carson Wentz with better talent, and now they have to prove their talent all over again.

In the NFL, which stands for Not For Long, you’ve got to prove yourself every game.

”It’s time to go out there and show what we can do, try and get on the same page as quickly as possible, and ultimately have success,” Smith, one of five new wide receivers on the roster, told the AP.

The Eagles haven’t had a 1,000-yard receiver since Jeremy Maclin in 2014. They signed Jeffery and Smith in free agency, drafted Mack Hollins and Shelton Gibson, then added 2016 practice squad player Marcus Johnson.

Jeffery, if healthy, is a legitimate No. 1 receiver. He went to one Pro Bowl and had two seasons with at least 80 catches and 1,100 yards receiving in Chicago.

”I think for every quarterback, there’s a great feeling that you have when you’re either in the shotgun or under center and you kind of look out there and you see your guy,” Eagles offensive coordinator Frank Reich said. ”And you look across and you see who is covering him. When you have a feeling as a quarterback like, ‘He’s always open; he can always win,’ it gives you a lot of confidence. You can’t underestimate how important that is. I think that’s a primary thing that Alshon brings to the table.”

Smith will stretch defenses, allow Wentz to show off his arm strength and open up the underneath passing game for the tight ends. He started for the Ravens when they won the Super Bowl five years ago and spent the past two seasons in San Francisco.

”I think we have a very talented receiver corps, but it doesn’t matter if we don’t perform well on Sundays,” Smith said.

Blount led the NFL with 18 TDs rushing last year while earning his second Super Bowl ring with the Patriots. He’s a powerful runner who should help the Eagles improve their ground game in short-yardage situations. Blount complements the speedy Darren Sproles and shifty Wendell Smallwood.

”It’s going to be a great effort by all three guys each and every week,” coach Doug Pederson said. ”We want to get all of them, obviously, involved in the game plan.”