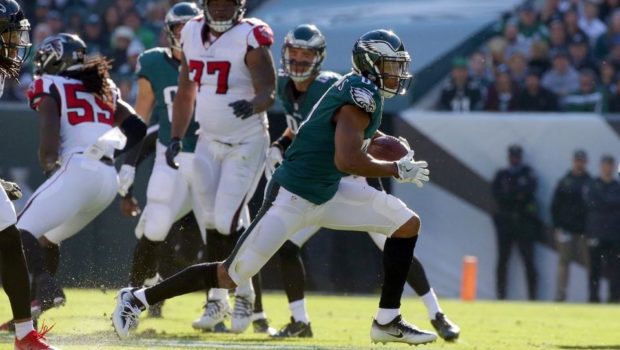 EAGLE MATTHEWS ISSUE: IT’S THE KNEE NOT THE BUCKS!

So, Eagles wide receiver Jordan Matthews is a limited participant in the early stages of training camp because of a knee injury.

Matthews’ injury was described as tendinitis, but he was more interested to discuss a recent report that his absence from practices in the spring was about his desire for a new contract rather than any issue with his knee.

“I would literally never do that,” Matthews said, via ESPN.com. “If you guys know me any from the time I’ve been here, I go to work. This is a privilege to be able to play football regardless, whether it’s the Philadelphia Eagles or it’s anybody, to play in the NFL, I’ve always wanted to do this. So any day I can come out here and play, I’m going to do that. I believe that when you go to work, you’ll end up seeing the fruits of your labor get paid off. I would never sit out to try and force somebody’s hand. That’s just not me. I’m going to come out here and go to work. I wasn’t able to, that was the breaks, but I’m out here now ready to go.”

Matthews is in the fourth and final year of the rookie deal he signed as a second-round pick in 2014 and there hasn’t been any indication that the Eagles want to lock him up before the season. Given the other moves they made at receiver this offseason, they may not change course when the year is out.

If so, Matthews will be winding down his time with the Eagles and staying healthy will be essential to landing a deal anywhere when 2018 rolls around.