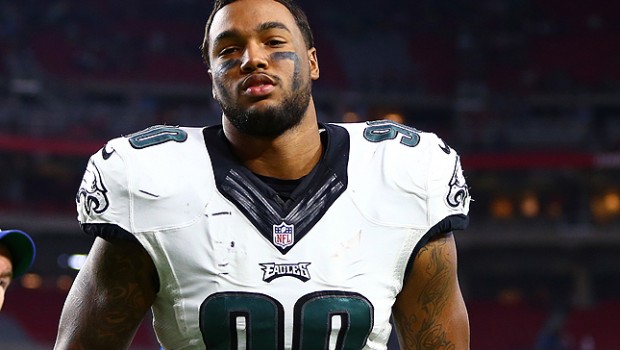 MARCUS SMITH: ‘TRA THOMAS WAS RIGHT, MY BODY HAS TO CHANGE’

Marcus Smith was drafted No. 1 last May by the Eagles and projected to be an outside linebacker. But he was so bad and his practices were so awful that he could barely make it onto the field.

His critics were a mix of fans and coaches (anonymously, of course), but when Tra Thomas, who coached Birds’ linemen last season, said the 6-foot-3, 253 pound Smith had the body type of a “high school athlete or college athlete,” Smith decided to defend himself.

By agreeing with Thomas!

“I’m kind of blind to all that stuff,” Smith said on 97.5 The Fanatic on Saturday afternoon. “The first time I heard about criticism was when the media or somebody brings it up [to me]. I usually don’t look at newspaper clippings, listen to radio shows or even what the media says.

“Again, you can’t get caught up with that stuff, especially when you know what’s going on on the inside. I know that the coaches are coaching me up, training me up to be able to play and be a playmaker at that position.

“What I’ll say is … Tra was right,” Smith said. “My body type has to change. I can’t look like a quarterback forever. That’s what I used to play. I’m still, during the season trying to look like that type. Right now I”m 265, I’m really eating well, trying to maintain that weight … I’m running with that weight and I’m feeling really good right now.

“Everything that Tra has said, he’s already told me before. When he says that, it’s just the truth. I just have to get bigger and stronger and be productive at that weight so the coaches can be impressed.

“I just want to come back ready to go the right way,” Smith said. “I’m feeling good and I just want to have the opportunity to showcase my talent. I think last year was a very good learning experience for me. It gave me a chip on my shoulder coming into this year.”