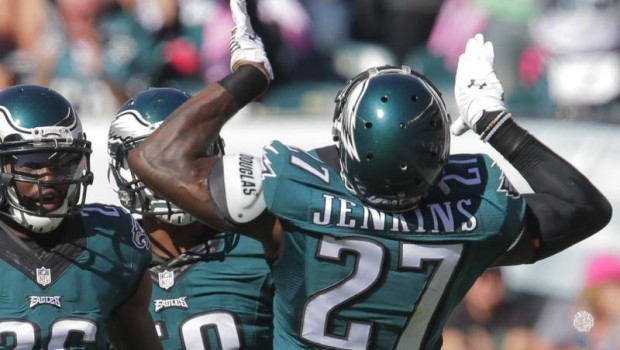 EAGLE MALCOLM IN THE MIDDLE: COME ON BABY, LIGHT OUR FIRE!

As they say in golf:

Malcolm Jenkins has become the Eagles; leader in the clubhouse.

Make that the locker room.

“Hopefully, it lights a fire under some people,” safety Jenkins said in the quiet visitor’s locker room at Bank of America Stadium early Monday morning.

The Eagles, who had won two straight games to move into first place in the NFC East, thudded back to reality Sunday, losing, 27-16, to the undefeated Panthers.

Jenkins was asked about what needs to change during the next weeks, before the Eagles face the Cowboys in Arlington, Texas, and the veteran safety with a Super Bowl ring answered honestly.

“Hopefully, guys take the opportunity during the time off to get healthy and to really evaluate themselves,” he said.

“Because we’re at the halfway point in the season and everything is in our control and we’re sitting in a decent spot, but there’s things we have to get better at if we really want to do something this year.

“I think we’re a confident team, and I think we have what we need in this building to get it right, but we’re not going to just show up and start winning games.

“There’s things we need to correct and things we need to get better in order for us to be a good team. We have all the confidence in the world in the guys we have and you see it at times during games, but I think for whatever reason we shoot ourselves in the foot or we give up plays here and there that we need to make.

“So especially on this bye week, we need to start taking a hard look at ourselves from a coaching standpoint and from a players standpoint, and everybody’s got to be critical of themselves and figure out where they need to get better.”