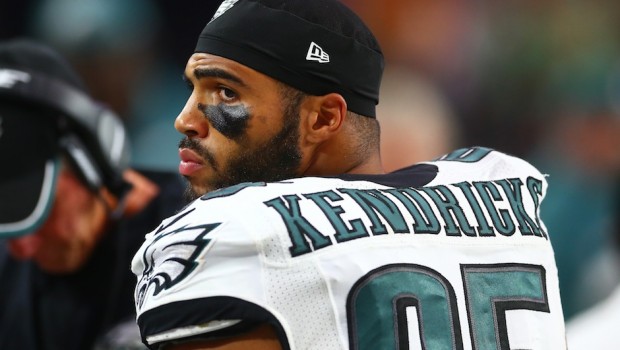 EAGLE LB KENDRICKS: REDSKINS GOT SOMETHING COMING TO THEM

Eagles linebacker Mychal Kendricks didn’t let last night’s 40-17 smackdown by the Arizona Cardinals stop him from trash-talking the Washington Redskins, whom the Eagles play Saturday night at the Linc.

Kendricks, the Eagles’ fourth-year inside linebacker, had a message for the Redskins Sunday in the Eagles’ locker room at the Linc:

“If I know this team and I know myself and I know the guys in here, man, the Redskins got something coming to them,” he said. “For real. And that’s real s—. That’s all I’ve got to say.”

The Redskins beat the Eagles in the first meeting, 23-20, the first weekend of October at FedEx Field.

The Redskins lead the NFC East with two weeks left at 7-7 and they’ve won five of their last eight after a 2-4 start.