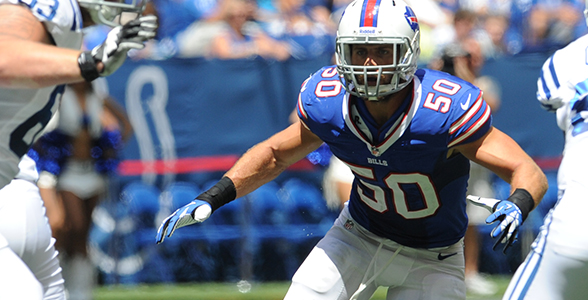 EAGLE FANS WANT TO KNOW: WHO THE HELL IS KIKI ALONZO????

If he fully recovers from ACL surgery, Alonzo and Mychal Kendricks will give the Eagles a formidable inside linebacker duo.

So, Eagles fans want to know:

Who exactly is Kiki Olonzo?

Alonso played four years at Oregon under current Eagles coach Chip Kelly, finishing his career with 144 tackles, 21 of which stopped the opposition for a loss, as well as 3.5 sacks, six interceptions, nine passes defensed and three forced fumbles. He was one of the league’s top rookies in 2013, finishing four votes shy of Jets defensive end Sheldon Richardson in Defensive Rookie of the Year voting.

Alonso had finished third in the NFL with 159 tackles in 2013, adding two sacks, four interceptions and four passes defensed. He finished the season as PFF’s ninth-highest graded inside linebacker, proving particularly effective in coverage, where he graded out second-best. He also had 39 run stops, according to PFF’s tracking, tied with Luke Kuechly for seventh-most among 40 inside backers that played at least half of their team’s defensive snaps. He missed the entire 2014 season with a torn ACL suffered in training camp, but should be healthy in time for next season.

Though the Bills were supposedly considering moving Alonso to outside linebacker before electing to trade him, it seems likely that Alonso will slot in at inside linebacker next toMychal Kendricks in the Eagles’ 3-4 defense. Kendricks was drafted in the second round of the 2012 draft out of Cal, and he’s been a mainstay in the midde of Philly’s defense since they switched to the 3-4 in 2013. He’s missed an average of two games a year, but still managed to pick up 201 tackles, nine sacks, three picks and 16 passes defensed in his three seasons.

Kendricks and Alonso should form one of the more formidable inside linebacker duos in the league, presuming Alonso returns to full health. They both have excellent speed and coverage skills to work the hook-to-curl zones, as well as the ability to read blocking schemes and fill running lanes in front of them. With Connor Barwin rushing the passer from the edge, the Eagles are well on their way to one of the NFL’s best linebacking corps. They’ll have to pick up another pass-rusher in free agency or the draft to replace the departed Trent Cole and the probably-departing Brandon Graham, but that trio gives Philly a big head start.

Apart from the on-field considerations, there is the money to consider. McCoy was scheduled to have the NFL’s second-highest cap hit among all running backs next season ($10.25 million), and if the Vikings elect to move on from Adrian Peterson, it would be the highest in the league. Alonso, meanwhile, has only the 43rd-highest cap hit among inside linebackers at just under $786 thousand. Philly saves a ton of money in the trade, which has to be taken into consideration.