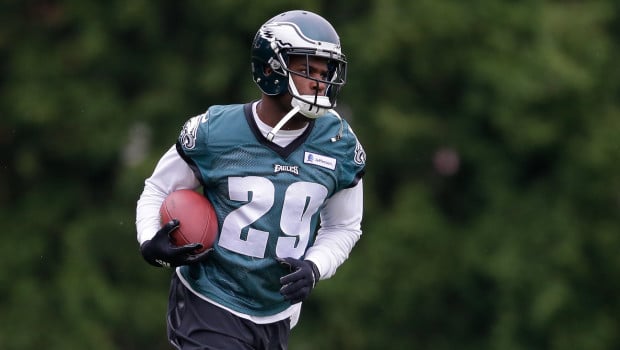 EAGLE DEMARCO: NO EMOTION, ALL BUSINESS FOR COWBOYS GAME

Eagles running back DeMarco Murray is approaching Sunday’s battle with his former team the way a businessman would:

No emotion, focus on the task at hand!

The Dallas Cowboys may have a score to settle with Murray, but he’s not buying into it.

After four seasons in Big D, last year’s Offensive Player of the Year says he’s content in Philly and doesn’t see Week 2’s showdown with the Cowboys as something special.

“Not at all,” Murray said, per ESPN.com. “Not from my end, at least. This is a true business. I’m very emotionless when it comes to a lot of things, especially the business side. I understand the business aspect of the NFL. It’s all about finding guys who are right for your system.”

It’s hard to believe he doesn’t want to drop a bomb on the ‘Boys. Murray furnished Dallas with a league-leading 1,845 yards off an outrageous 392 carries last season. They ran him into the ground, but made no effort to re-sign him, leaving Chip Kelly and the Eagles to come calling.

“I’m not worried about those guys,” Murray said of his old team. “I’m sure they’re a great group of guys and a great organization. I have a lot of respect for them, but I moved on a long time ago. I’m happy to be here.”

If he isn’t looking to stick it to Dallas, Murray is certainly determined to make good after Monday night’s scant nine yards off eight attempts. What better place to start than with the defense he knows so well?

3 thoughts on “EAGLE DEMARCO: NO EMOTION, ALL BUSINESS FOR COWBOYS GAME”