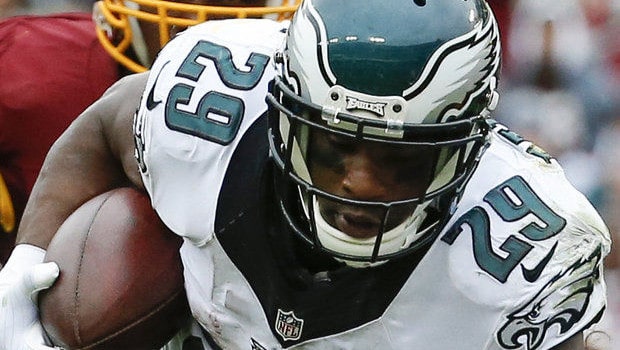 EAGLE DEMARCO MURRAY: SEASON NOT OVER, WE’VE GOT PRIDE!

DeMarco Murray came to Philly this year as a free agent and he is making a lot of money to carry the the rock.

Through four games the Eagles are averaging just 70 yards on the ground, 30th in the NFL.

“We are all doing the best we can,” Murray said. “Obviously those guys get paid as well on the other side of the ball. For four weeks we have played some pretty good defenses, and they have been doing a pretty good job. I think you have to look in the mirror individually and collectively.”

Murray has totaled just 47 yards this season with one touchdown. His lack of touches left Murray frustrated after the team’s most recent loss, saying he doesn’t feel he is getting the ball enough.

On Thursday, Murray said he hasn’t had any talks with head coach Chip Kelly about getting an increased role.

“No, we are all on the same page,” Murray said. “We all know what needs to happen to get this thing rolling offensively. The defense has been playing amazing the past four games, and I think offensively we just have to work hard, do the little things right and get into a rhythm.”

And does he need to get the ball a certain amount of times to get in that rhythm?

“No, there isn’t a certain number,” Murray said. “I think the more opportunities we have, the more balls you get individually. I think you just feel better. The juices flowing a little bit. But I think that is everyone, not just me.”