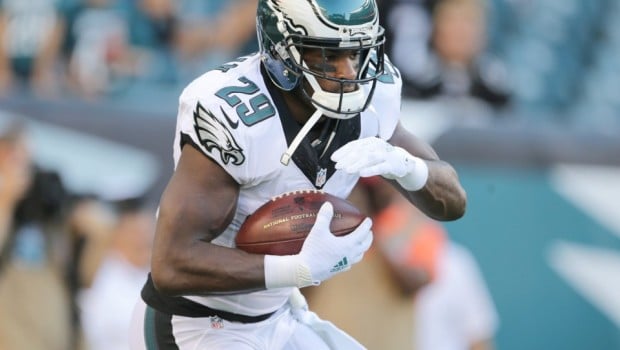 The past week has been filled with recriminations and reports that Eagle running back DeMarco Murray is pissed off at his role in the offense and that he wants out of the big bucks free agent contract he signed in March.

Despite all that the negativity, the running back insisted Thursday he wants to remain in Philadelphia.

The 27-year-old ex-Cowboy, who signed a five-year, $40 million deal, said he did not regret signing with Chip Kelly and the Eagles.

“Not at all. I’m committed to Chip and Jeff and the guys in this locker room,” he said.

Murray played just 14 snaps during Sunday’s victory. Both Darren Sproles and Kenjon Barner outplayed Murray. The quicker backs were able to get to the edge more frequently, ignited a stagnant offense in Foxborough. Murray lacks lateral quickness to get to the edge, which has been responsible for his struggles in Kelly’s offense.

Over the course of the week, offensive coordinator Pat Shurmur dismissed Sunday’s snap count as a one-game aberration, while Kelly combatted the notion that Murray is unhappy with the offense.

Murray had no comment on his role in the offense when asked Thursday.

Whether or not Murray is a bad fit for Kelly’s offense is up for debate.

The running back’s snap count will be interesting to watch Sunday against the Buffalo Bills. During the week Chip can dismiss the talk of benching Murray and the player can say he loves being on the team paying him to be there.