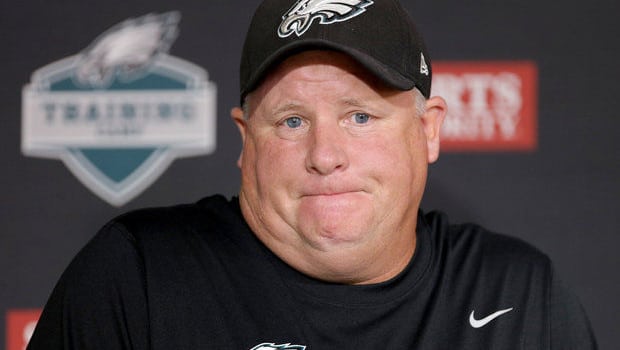 EAGLE CHIP: I NEVER SPOKE TO USC OR ANYONE ELSE ABOUT A JOB!

Since Chip Kelly has never had any interest in leaving the Eagles for a coaching job at USC, it was slightly anticlimactic for the Eagles coach to address the issue on Monday.

So, sorry Jeff McLane, Eliot Shorr-Parks and all the other so-called journalists who have propagated the meme that Kelly will be gone after this season even though they have never quoted anyone on the record or spoken with Kelly or owner Jeff Lurie about it.

During his Monday press conference, the Eagles’ coach said he never spoke to anyone connected with USC, which Monday announced that interim coach Clay Helton will become the school’s full-time coach.

Kelly refuted a prior report that someone connected to USC had met with Kelly in Philly last Friday to gauge his interest in the job.

“I wasn’t even in Philadelphia Friday,” Kelly said.

Kelly reaffirmed his commitment to the struggling Eagles by saying he’s never been involved with any other job since taking over the Eagles in early 2013.