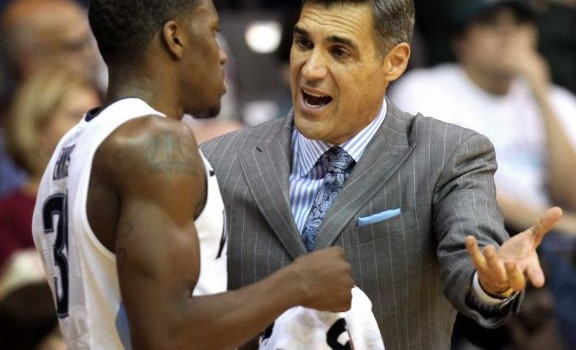 DYLAN ENNIS GETS TO THE POINT, TRANSFERRING FROM VILLANOVA

They’re breaking up the Villanova gang that won 62 games in two seasons.

Well, not exactly they.

Villanova announced on Thursday morning that guard Dylan Ennis will be transferring out of the program.

“Dylan has chosen to play his final season in another program,” Villanova head coach Jay Wright (in photo above with Ennis) said in a statement. “We’re proud that Dylan will graduate in May with a degree in communications and appreciate all of his efforts throughout his career here.”

Ennis will be eligible to receive a graduate transfer waiver from the NCAA, meaning that he’ll likely be eligible immediately wherever he decides to finish his college career.

With the addition of freshman Jalen Brunson next fall, the Cats would have four potential point guards on the roster, and Ennis has expressed a desire to play the point, which is the province of Ryan Arcidiacono.

Ennis played two seasons at Villanova after transferring from Rice. This past season he averaged 9.9 points and 3.7 boards for the Wildcats, who won the Big East regular season and tournament titles.