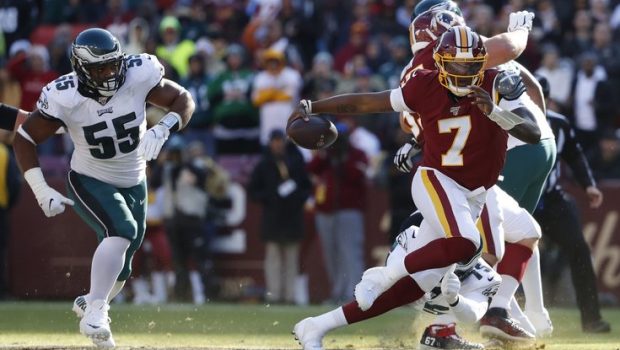 DWAYNE HASKINS WILL START AT QB FOR WFT VS. EAGLES IN OPENER!

Washington coach Ron Rivera today announced that Dwayne Haskins is the starting quarterback for Week 1 against the Eagles.

“Dwayne’s lived up to everything we talked about in January,” Rivera said at his presser.

Since taking over the Washington Football Team in January, Rivera has maintained Haskins must win the starting gig.

From pre-draft dalliances with potential rookies during the NFL Scouting Combine, to the trade for Kyle Allen, to the repeated talk of Alex Smith joining a competition, Rivera never allowed Haskins to get comfortable.

One thought on “DWAYNE HASKINS WILL START AT QB FOR WFT VS. EAGLES IN OPENER!”