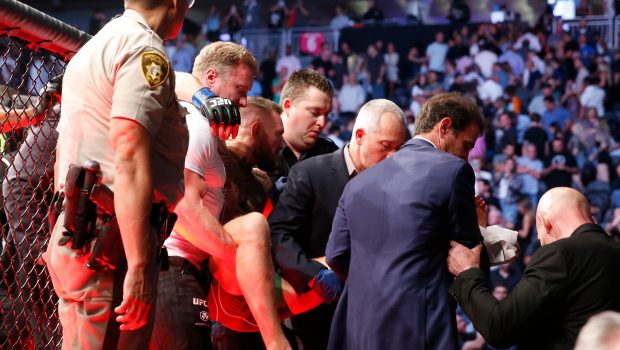 UFC 264’s main event ended with a whimper, not a bang. Dustin Poirier hit Conor McGregor with a combination at the end of the first round last night, McGregor went to plant his left foot and his leg buckled, sending him to the mat. Poirier followed up with punches on the ground as time expired in the round.

With McGregor clearly hurt, referee Herb Dean called the lightweight bout. The official result was Poirier by TKO (doctor’s stoppage) at 5:00 of the first round. A stretcher was brought in to transport McGregor to the hospital. The video replay showed McGregor’s lower leg bent gruesomely as his foot hit the canvas.

HEAVY ground and pound by the Diamond ?#UFC264 pic.twitter.com/MlDAiNKKtW

UFC president Dana White later said the injury was to McGregor’s lower tibia and that he will have surgery this morning.

The finish left the sold-out crowd disappointed. There was a mixture of boos and cheers when Poirier was announced as the winner. This was one of the most anticipated trilogy fights in UFC history.

“I beat the guy,” Poirier said in his postfight interview.