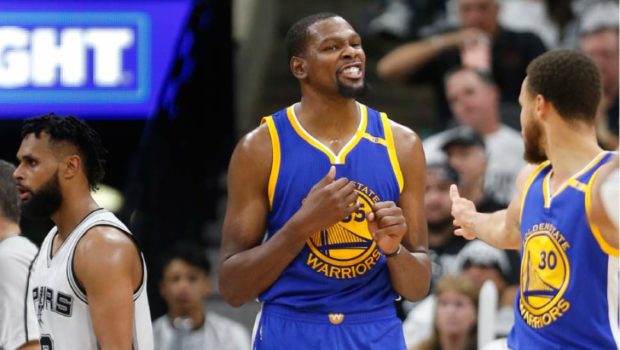 It’s all over but the pouting.

Kevin Durant saw to that with 33 points and 10 rebounds as the Golden State Warriors beat the injury-riddled Spurs 120-108 on to take a 3-0 lead in the Western Conference Finals.

“They were going to come out and hit us in the mouth,” Durant said of what the Warriors anticipating entering the game. “I think we did a good job of taking that punch and just kept playing.”

Golden State has a chance to complete its third straight series sweep in Game 4 at San Antonio on Monday night. The Warriors are the third team in NBA history to win their first 11 playoff games. Cleveland is 10-0, with a 2-0 lead over Boston in the Eastern Conference final.

“I’m not surprised,” Golden State point guard Stephen Curry said of the lead. “Our goal is to win every game we play. We answered a lot of challenges throughout the course of the playoffs and learned a lot of lessons through winning. Against the Spurs, they challenge you no matter who’s out there. You’ve got to play well to beat them.”

“We have to fight with the soldiers we have,” San Antonio veteran Manu Ginobili said. “Nobody is going to feel sorry for us.”

Lee left with 2:57 remaining in the first, unable to put any weight on his left leg after he landed awkwardly on it following a foul by Draymond Green. Joel Anthony had to take a free throw in place of Lee, who was taken to the locker room in a wheelchair. Lee’s status is unknown.

San Antonio still managed to match a postseason high with 33 points in the opening quarter and lead by as many as six points in the first half.

The Spurs played on emotion, but eventually succumbed to the Warriors’ firepower.

“It’s not easy. Even if we were healthy, they’re a great team,” San Antonio guardDanny Green said. “It wouldn’t be easy, regardless. With the bodies going down, very much so an uphill battle.”

Durant had 19 points in the third quarter.

“I feel I can make every shot I shoot because I shoot good ones and I try to get to my spot,” Durant said. “So, when they called my number, I just tried to go out there and be aggressive.”

Klay Thompson had 17 points, and Javale McGee added 11 points, including 11 in the opening quarter for the Warriors.

Ginobili led the Spurs with 21 points, joining Hall of Famer Kareem Abdul-Jabbar as the only players 39 or older to score 20-plus points in a conference final.

San Antonio has been outscored by 73 points since Leonard left Game 1 with 7:52 remaining and the Spurs leading 78-55.